When Annie Burke got her stage IV lung cancer diagnosis she began planning her funeral, she admits. She read books on grief and dying, bought an additional insurance policy and even signed up with a cremation service.

It wasn’t totally irrational. The estimated five-year survival rate for stage IV non-small cell lung cancer is about 10 percent. Lung cancer is the leading cause of cancer deaths among both men and women. Each year, more people die of lung cancer than colon, breast and prostate cancers combined. 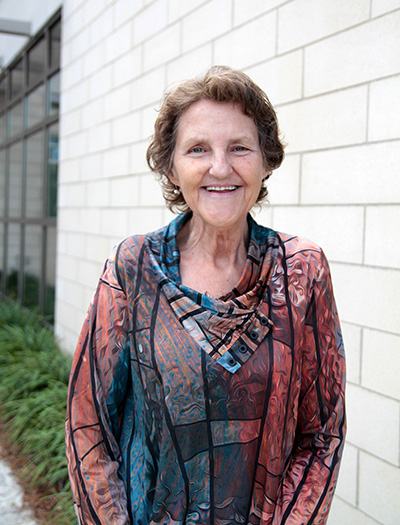 But treatment options are improving and patients are living longer, largely in part thanks to clinical trials. That Annie is still doing yard work today – three years after her diagnosis – is in large part because of a clinical trial called Lung-MAP.

“I really thought this was a death sentence,” the 59-year-old Wilmington Island resident says. “I had no idea we had come so far in diagnosing and treating.”

Annie went to an urgent care one day in October 2015 for what she thought was bronchitis. As someone with chronic obstructive pulmonary disease (COPD), she was familiar with bronchitis. However, her test results didn’t look right to the urgent care staff, and she was told to go to the Candler Hospital emergency department. By the next morning, she had a biopsy and a port in her chest.

“I had a group of people walk in my door that I had never seen before. It was overwhelming and shocking,” Annie says. “But you guys just knocked it out of the park that fast.”

Her biopsy revealed stage IV squamous cell lung cancer. It was so invasive Annie still remembers a scan of her chest looking like a lit-up octopus surrounding her chest cavity. It was a shock.

“I had no idea. I only knew I couldn’t walk around as long as I used to,” Annie says.

Because the cancer was so invasive, Annie was not a candidate for surgery. Her team of physicians recommended chemotherapy and radiation therapy.

Starting in November 2015, Annie began radiation therapy on the TrueBeam device. TrueBeam delivers a radiation beam that targets the cancer and keeps exposure to healthy cells to a minimum. Annie would have 10 radiation sessions between Nov. 20 and Dec. 4.

Upon completing radiation, Annie began chemotherapy. She would receive chemotherapy one day a week for two weeks in a row and then have one week off, which was considered a “cycle.” She continued this for a total of six cycles.

Within about three months of treatment, Annie could take longer walks without losing her breath. There were still bits of cancerous tumors in her chest, but nothing resembling an eight-legged octopus.

The treatments left Annie fatigued, and she experienced nausea. She also lost her hair. When it started to fall out, Annie shaved her head. Not only to take her mind off it, but also to take control, she says.

Another tumor is discovered and more treatment

About a year after her cancer was discovered, Annie had a seizure. A scan revealed the most shocking part of her journey: a tumor in her brain.

“When you are first diagnosed with something like that you just go into a haze,” Annie says. “It is an emotional time, but at the same time, everybody at the Lewis Cancer Center has made it really easy for me.”

Once the cancer had spread to her brain, Annie no longer had chemotherapy sessions. However, radiation treatment was again needed. Between Oct. 19, 2016, and Nov. 1, 2016, she had 10 more radiation sessions again on the TrueBeam device.

Because the cancer had spread to her brain, Annie was a candidate for the Lung-MAP clinical trial. She was considered for Lung-MAP when she was first diagnosed; however, patients are not eligible to actually go on the trial’s treatment study unless their cancer progresses after chemotherapy.

Lung-MAP is a targeted, second-line therapy to treat patients with recurrent stage IV non-small cell lung cancers. Based on the pathology of Annie’s tumors, she was assigned to a sub-study that required immunotherapy on the drug nivolumab. (Opdivo is a brand name.)

Annie began immunotherapy in late 2016, after she was finished with radiation to treat the brain tumor. She now spends every other Wednesday at the LCRP. Her morning includes lab work and the afternoon is for a 30-minute infusion session.

As part of the clinical trial, Annie is asked to track how she’s doing with her treatments and any symptoms she experiences. She has some nausea but mostly fatigue. It’s almost a guarantee three days after her infusion Annie will sleep all day, she says.

But she’s OK with that. In fact, she describes this as her new normal.

“There are scary parts. I can’t deny that,” Annie says. “But, you just find a new normal. That’s where I am at. This is my new normal, and I will keep on going as long as y’all will have me.”

Annie will stay on immunotherapy for as long as she tolerates the drug, experiences no major side effects and wants to continue. And she wants to. There’s no quit in this warrior.

“I call myself a warrior, and I tell my online support group that the first thing you need to do is consider yourself a warrior in this. Not a victim. Not a patient, but a warrior who’s going to fight this.”

Annie’s positive attitude is another big part of her survival. She believes if you face something with a positive attitude, you get positive results. She also hopes other cancer survivors understand there are treatment options out there, and they are not alone. That’s something the Lewis Cancer & Research Pavilion taught her, she says.

“Every person there is just caring and loving. I come in and everyone is smiling,” Annie says. “It’s not an intimidating environment because you guys don’t treat us like we are cattle going through the process. We have names. We don’t have numbers. I really appreciate that.”

Unfortunately, Annie is not cancer free. There’s a stubborn little tumor that sits in Annie’s chest. Fortunately, it’s not growing. Nor is it stopping her from doing the things she loves like spending time with her spouse and dogs, working in the yard and continuing her passion of creating beautiful stained glass mosaics.

“No, I’m not cured, but I can live my life again. I can get back to things I thought I was never going to do again. That’s amazing to me,” Annie says.

“I’m not giving up. There’s a whole lot out there to live for. I haven’t gotten that grandbaby yet,” Annie adds with an infectious smile that cancer can never take away.