Our History and Region

St. Joseph's/Candler is rich in history and heritage. Its anchor institutions, St. Joseph's Hospital and Candler Hospital, are two of the oldest continuously operating hospitals in the nation. As such, both have been a part of the Savannah landscape and culture for a combined history of more than 350 years.

In addition, the  Georgia Infirmary and  Mary Telfair Women's Hospital - both historic in their own right - bring that service record to nearly 650 cumulative years.

In 1997, the two legendary hospitals and their various entities developed a joint operating agreement, creating the largest health system in Southeast Georgia and the South Carolina Low Country. 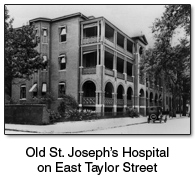 St. Joseph's Hospital began in 1875 when the Sisters of Mercy took over the operations of the Forest City Marine Hospital in what is now the historic district. Since its inception, Savannahians have trusted the care, compassion and medical expertise that have become synonymous with the St. Joseph's name. It is a 330-bed, general acute care facility situated on Mercy Boulevard on Savannah's South side and is home to some of the most breakthrough medical technology and innovations. Specialty services at St. Joseph's include  The Heart Hospital,  The Institute for Advanced Bone & Joint Surgery and the  Institute of Neurosciences, each offering unsurpassed space-age technology and expert clinical care.

1875-1876 - Responding to the plight of sick seamen, the Sisters of Mercy are contracted to operate the Forest City Marine Hospital. Better facilities and more space soon prompted a move to downtown Savannah. The hospital was renamed St. Joseph's Infirmary.

1960-1970 - The Sisters of Mercy moved the hospital from its downtown location to the city's spacious South side, an area with high growth potential. The seven-story structure, situated on 28 acres, was dedicated on August 15, 1970.

1997 - St. Joseph's Hospital entered into a joint operating agreement with Candler Hospital and together formed St. Joseph's/Candler, the region's largest and most experienced health care provider.

Candler Hospital is Georgia's first hospital (first chartered in 1804) and the second oldest continuously operating hospital in the United States. The beginnings of Candler Hospital's ministry of healing are closely associated with the history of medicine in the earliest days of the colony of Georgia. Located in Savannah's Midtown and affiliated with the Methodist Church, Candler has been long recognized as offering the finest in primary care, outpatient services, general surgery and women's and children's services. The 384-bed Candler is home to the  Mary Telfair Women's Hospital and the  Nancy N. and J.C Lewis Cancer & Research Pavilion, both renowned medical facilities offering some of the most advanced patient services in the country and has been a vital part of the Savannah community for more than eight generations.

1804-1872 - Georgia Colony's first hospital was founded for sick seamen in 1804. In 1808, it became incorporated and was named the Savannah Poor House and Hospital. The hospital was initially located in a private home on Joachin Street. In 1819, the hospital erected its first building. In 1872, the name was changed to Savannah Hospital.

1872-1888 - Savannah Hospital was headquarters for the Savannah Medical School and home to the city's first nursing school.

1930 - Savannah Hospital was acquired by the Georgia Hospital Board of the Methodist Episcopal Church South and renamed in honor of the Bishop, Warren A. Candler.

1960 - Candler Hospital joined forces with the longest operating women's hospital in the United States, the Telfair Hospital for Females. Created in 1886 through the estate of Mary Telfair, the hospital became Candler's obstetrical unit.

1980 - Candler Hospital moved to its current location on Reynolds Street. Believed to be the second-oldest general hospital in continuous operation in the United States, Candler Hospital has serviced more than nine generations of Savannah-area families.

1997 - Candler Hospital entered into a joint operating agreement with St. Joseph's Hospital and together formed St. Joseph's/Candler, the region's largest and most experienced healthcare provider.

Born in 1791, Mary Telfair was an independent spirit who valued beauty and truth. She came from a prominent family, the daughter of one of Georgia's governors. Never one for pretention, Mary devoted her life to helping others and was a keen intellect, interested in people, art and politics. In 1875, only a few days before her death, Mary placed a provision in her will that allowed for the erection of hospital dedicated to women's health. The Telfair Hospital for Females was built in 1884 and opened two years later. It was originally located at the southwest corner of Drayton and New Houston (now Park Avenue) streets. In 1960, it joined with Candler General Hospital and later moved into its current facility in midtown Savannah. Learn more about Mary Telfair and the Mary Telfair Women's Hospital.

Savannah: The Home of St. Joseph's/Candler

Savannah blends elegance and refinement with awe-inspiring landscapes and grand architecture that is centuries old. Its residents have a world-renowned reputation for Southern hospitality that is rare in modern times.

Founded in 1733 by General James Oglethorpe, Savannah is Georgia's first city. The small settlement on the high bluffs of the Savannah River became America's 13th and final colony, and was named "Georgia," after England's then-ruling leader, King George II.

Oglethorpe designed the city in such a manner that allowed for open streets intertwined with moss-draped public squares and other open green spaces. Today, Savannah offers the largest historic district of its kind in the country and has become a model for urban planners from around the world.

A bustling port city and home to numerous national and international companies, Savannah offers a diverse economy suitable for business and family. As the commercial hub of Southeast Georgia and the coast, the city combines metropolitan living with that of a small town, steeped in southern atmosphere and heritage.

For more information on Savannah and the surrounding area, please visit the Savannah Chamber of Commerce's website.

St. Joseph's/Candler has expanded to include facilities and services in the Low Country district of South Carolina, an area known for its natural beauty and rich cultural heritage. Low Country includes Beaufort, Colleton, Hampton and Jasper counties.

Since the first permenant settlements appeared in the sea islands in the 1690's, the southern tip of South Carolina has been a source of culture, commerce, and history.

After the divisive period of the Revolutionary war to the defeat of the British around 1782, Low Country spent the next 80 years becoming a hub of agricultural prosperity with their cotton and rice crops.

Robert Barnwell Rhett, the "Father of Secession," of Beaufort, South Carolina started his separatist movement in Bluffton in 1842. The Civil War haulted agricultural production in the Low Country, and though cotton recovered during the Reconstruction, agriculture never regained its original strength in the region. The area diversified its resources and continued to thrive.