For 31 years, Cindy Waldrop walked the halls of high schools, most recently Liberty County High. She would chase after students and stroll the campus.

Cindy always felt like she was the slowest walker. She joked it was because she’s short. It turns out it was something much more serious than that. 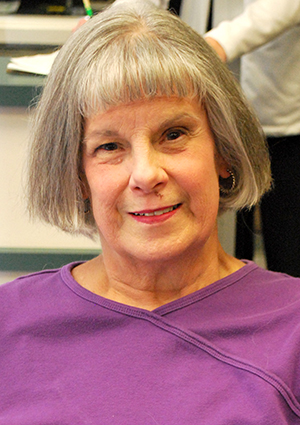 For years, Cindy was treated over and over again for asthma and acute bronchitis. At age 57, her pulmonologist, Dr. Doug Mullins, ran a DNA test which revealed she had the genetic disorder cystic fibrosis.

Cindy strengthened herself and learned to control her symptoms thanks in part to St. Joseph’s/Candler Cardio Pulmonary Rehabilitation.

“We give patients the strength and the confidence that it is OK – you can breathe, you are strong and you can get out and do things,” says Justine Hardy, M.S., health educator for Cardiopulmonary Rehabilitation.

Cystic fibrosis affects the cells that produce mucus, sweat and digestive fluids. It causes these fluids to become thick and sticky, leading them to plug up tubes, ducts and passageways making it hard to breath. More than 30,000 people in the United States are living with CF and more than 75 percent are diagnosed by age 2.

“It was a real shock when I learned I had CF,” Cindy, now 64 says. “Life expectancy for most CF people is someone much younger than 64.”

St. Joseph’s/Candler Cardio Pulmonary Rehabilitation has outpatient rehab programs for cardiac and pulmonary patients that include exercise, education, counseling and ways to live a healthier lifestyle.

Pulmonary rehab is designed to help patients with conditions such as COPD, emphysema, asthma and bronchitis recover faster and return to daily activities sooner, Hardy says. There are stipulations for insurance to cover pulmonary rehab based on a person’s lung volume.

Forced vital capacity, or FVC, is the amount of air which can be forcibly exhaled from the lungs after taking the deepest breath possible. FVC is used to determine both the presence and severity of lung disease. To meet the perimeters so pulmonary rehab is covered by insurance, a person’s FVC has to be 65 percent or lower, Hardy says. A healthy person would be 80 percent of higher.

“Those with disease and lower than 65 percent lung volume are quite significantly diseased,” Hardy says. “Pulmonary rehab can really help. We may never be able to get that lung function fully back, but what we are going to do is make sure we can monitor their symptoms, help with their symptoms and help them feel less short of breath over time because we are getting those muscles around the lung a little bit stronger.”

At the beginning of the pulmonary rehab program, a comprehensive treatment plan is developed based on each individual patient’s needs. Essential components include:

Structured treatment plans help to improve functional status while factors that cause the disease are modified. As a result, pulmonary rehab may prolong life, reduce disability and raise physical and social functioning to the highest possible level.

“A lot of our pulmonary rehab patients have told me they were bed ridden or couch ridden or could only move a little bit throughout the house, and now they are getting up and going to the grocery store or their grandchildren’s graduation,” Hardy says.

Pulmonary rehab typically consists of 36 sessions, depending on insurance. For example, the VA only covers about 12 sessions, Hardy says. Sessions are an hour long and two to three times a week.  Patients will progress slowly as they continue in the program, exercising from just a few minutes at a time to the full hour. The rehab staff monitors their oxygen saturation and relays any concerns to their physician.

A physician’s referral is necessary for pulmonary rehab. The patient’s referring physician remains the primary physician during rehab and is kept informed of the patient’s progress. There are small co-pays, depending on the insurance.