Savannah woman no longer has dizzy spells, able to live her life again

For almost a year, Becky Haymons’ world was spinning – literally. The 76-year-old Savannah resident was suffering from symptoms of a vestibular disorder including dizziness, imbalance and nausea.

“The first time it happened, it reminded me of Dorothy in the Wizard of Oz. I was just spinning,” Becky describes. “I was turning to look at the clock and I just rolled my head to the left. When I did, my whole world started spinning. I was wondering, ‘Why is my fan on?’ because it’s cold outside.” 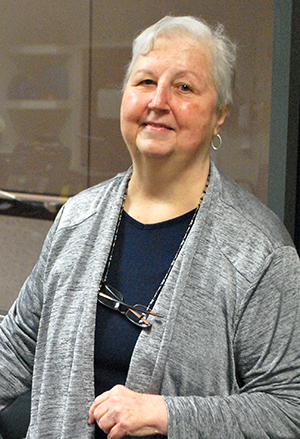 Becky would spend nearly a year visiting different doctors and doing a number of exercises. She finally started to feel better after seven sessions of physical therapy with St. Joseph’s/Candler Outpatient Rehabilitation.

The vestibular system includes parts of the inner ear and brain that help control balance and eye movements. If the system is damaged by disease, age or injury, vestibular disorders can result and are often associated with vertigo, dizziness, imbalance, vision disturbance and hearing changes.

Becky was suffering from loose crystals in her ear. Calcium carbonate crystals (otoconia) are normally embedded in the gel in the utricle of the  ear. They can become dislodged and migrate into one or more fluid-filled semicircular canals, where they are not supposed to be.

Fluid in the semicircular canals does not normally react to gravity; however, crystals do, therefore moving the fluid when it normally would be still. This excites the nerve endings in the canal, sending a message to the brain that the head is moving, even though it isn’t. The result is a spinning sensation, or vertigo, and imbalance or disequilibrium.

It was debilitating for Becky. Household chores became a challenge. She couldn’t pick anything up off the ground or get the laundry out of the dryer because everything would start spinning. She could no longer sew because she would lose total concentration. At church, her friends would notice she couldn’t walk straight down the aisle because of her imbalance.

When the dizziness would subside, Becky was left feeling nauseous. She spent a lot of time in bed due to that, which in turn made her legs become weak.

Vestibular disorders can be diagnosed and treated in various ways. The St. Joseph’s/Candler Center for Oto-Neurology has been treating patients with dizziness, vertigo and imbalance since the center was established in 1977. Doctorate level audiologist perform diagnostic testing to determine accurate diagnosis and then work with medical directors and referring physicians to determine the next best course of treatment which can include surgery, medication or vestibular rehabilitation.

Becky saw several specialists and had previously tried physical therapy at another location, but the spinning always returned. In early 2018, she decided to go to Georgia Ear, Nose & Throat Specialists, where her husband had been a patient. After a couple of treatments with Dr. Chip Goldsmith and the audiologist, Becky was referred to physical therapy at Candler Hospital.

“It had been a frustrating year,” Becky says. “But when I saw Dr. Goldsmith for the first time I had the feeling I was where I belonged. I had that calmness, that feeling that I was going to be taken care of.

“That’s the same feeling that I had with Milap (clinical manager, Candler Hospital Outpatient Rehab). I knew I was in the right place, and he was going to take care of me and whatever my problem was.”

How physical therapy can help

We often think of physical therapy for knee replacements or shoulder injuries. However, at St. Joseph’s/Candler Outpatient Rehabilitation, physical therapy also can be a vital tool to treat vestibular disorders and symptoms.

Each patient’s treatment plan is different because it’s focused on each of the symptoms and not every patient has the exact same symptoms, explains Carrie George, PTA, physical therapist assistant at Candler Hospital, who also worked with Becky. For some, they may feel lightheaded while others may feel spacey and groggy. Some may experience vertigo or disorientation in balance. 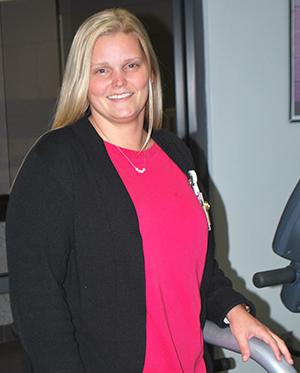 “We look at the dizziness and what’s causing that. We fine tune our treatment to each person,” George says.

During the initial meeting, the therapist will learn about the patient’s medical history and current condition. General balance tests will be performed so the therapist can get an idea of functioning. A treatment plan then will be formulated and include exercises for dizziness, balance and strength, as well as education.

One example of an exercise vestibular patients may do is chin tucks, lowing your chin from its normal position to the base of the neck. George starts by having the patient do a set of 10.

“A lot of times if they are five out of five on a scale of dizziness and do a set of 10, they will drop to a three out of five,” George says. “Then, we’ll do another set of 10 and dizziness is very minimal or zero.”

That may be followed by saccades, where the head stays still and the eyes move side to side. Once that feels OK to the patient, other head movements will be added. As the patient’s symptoms become under control, exercises are added to help with balance and strength.

In order to achieve optimal results, vestibular patients will need to comply with a home exercise program. George says patients are typically instructed on one or two exercises they need to do every one to two hours in sets of 10. Repetition is key to a successful recovery because it essentially retrains reflexes, George says.

“The best results we see are when people are compliant,” says George. “They come to their appointments when they are supposed to and they do all their exercises at home. We know it seems like a lot, but in order to get the best results, we have to see repetition.”

So far, it has worked for Becky Haymons. After her time with Dr. Goldsmith and completing physical therapy in April, Becky hasn’t had any dizziness episodes. She still does her exercises at home, and she’s also doing things she hasn’t done in almost a year like mopping the floor or walking an entire grocery store.

St. Joseph’s/Candler Outpatient Rehabilitation has five locations to serve vestibular patients, as well as other physical, occupational and speech therapy needs. To find an outpatient rehab center near you or for more information, visit our website.