A heart attack typically happens when blood flow, which brings oxygen to the heart, is obstructed. Heart attacks are described as a circulation problem. 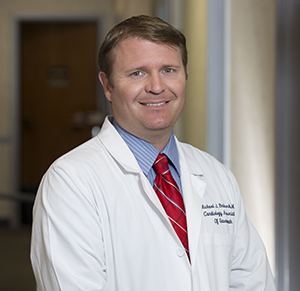 On the other hand, cardiac arrest is triggered by an electrical malfunction in the heart that stops the heart from working. With the heart’s pumping action disrupted, the heart can no longer pump blood throughout the body.

A heart attack can cause cardiac arrest by impeding blood flow the heart needs to perform, explains Dr. Michael Babcock, cardiologist with Cardiology Associates of Savannah and director of the Chest Pain Center at The Heart Hospital at St. Joseph’s/Candler. In fact, heart attacks increase the risk for sudden cardiac arrest, which can happen during an attack or even during recovery.

There are other causes of cardiac arrest including respiratory collapse, blood loss, trauma, stroke or other medical conditions, such as kidney dysfunction or infection, that impeded the heart from functioning properly, Dr. Babcock says.

What are the symptoms of cardiac arrest?

There’s a reason it’s also called sudden cardiac arrest. Oftentimes, cardiac arrest occurs suddenly without warning. Two symptoms that you can be aware of, however, are no normal breathing and sudden loss of responsiveness.

The chances of death from sudden cardiac arrest are much greater than heart attack alone.  More than 356,000 out-of-hospital cardiac arrest events occur each year in the United States, according to the American Heart Association. Nearly 90 percent of them are fatal.

A person suffering from cardiac arrest will quickly lose consciousness and have no pulse. Death can occur within minutes if the person does not receive treatment.

How do you treat cardiac arrest?

“With regards to out-of-hospital cardiac arrests, we know that time is of the utmost importance,” Dr. Babcock says. “Swift action by bystanders and family members can determine if a patient will survive.”

The first step is to call 9-1-1. Early, hands-only CPR and the use of an automated external defibrillator, if one is available, can help reverse cardiac arrest if performed within a few minutes.

“We have found that CPR with continuous chest compressions, hands-only technique, provide a tremendous support to patients in cardiac arrest. This does not require mouth-to-mouth resuscitation, which is often a barrier to patients receiving care out of the hospital,” Dr. Babcock says. “Community members should not avoid AEDs as all have a built-in audible program to walk the user through its use step-by-step.

“Bystanders are critical in this situation as minutes count and time is required for first responders and EMS to arrive on the scene.”

Once at the hospital, a team of physicians will work to restore the heart’s function and determine the cause of cardiac arrest. For example, if the cardiac arrest is due to a major respiratory event, then stabilization of the lungs is a priority, Dr. Babcock says.

If cardiac arrest occurs due to a dangerous heart rhythm, then the patient would be shocked out of the heart rhythm by a defibrillator.

“Cardiac arrest due to dangerous heart rhythms are the most amenable to quick improvement with defibrillation, hence the widespread practice of putting automatic electronic defibrillators in public areas,” says Dr. Babcock. “With cardiac arrest, multiple physicians may be involved including emergency department physicians, critical care physicians, as well as cardiac physicians.”