Head covers, gowns, disposable shoes and more. Donned and doffed accurately. Procedures checked and double-checked. It was like a scene from a scary outbreak-themed movie.

In fact, it was a training session for staff from St. Joseph’s Hospital and Candler Hospital emergency departments. While there were some giggles and smiles behind the masks and respirators, co-workers in each of the sessions were serious about the topic: being prepared to treat potentially deadly infectious diseases. 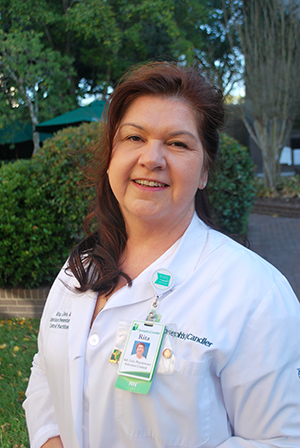 Most healthcare professionals hope they never have to treat such a disease, but being prepared for one can be lifesaving to the patient and healthcare workers.

The disease at the forefront of this training was Ebola. Ebola is a rare and deadly disease found in people and nonhuman primates. The viruses that cause Ebola are located mainly in sub-Saharan Africa. People get Ebola through direct contact with an infected animal, such as a bat or nonhuman primate, or a sick or dead person infected with Ebola.

An Ebola outbreak can leave thousands dead. A 2014-2015 outbreak in West Africa resulted in 28,616 cases of reported Ebola with 11,308 deaths, or a 39 percent mortality rate. Officials are currently monitoring another outbreak in Democratic Republic of Congo that as of the end of January 2019 has left more than 465 dead.

While Ebola cases in the United States are rare, they can occur. During the 2014-2015 outbreak, 11 people were treated for Ebola in the U.S. Typically, these patients traveled to West Africa or were clinicians in affected areas helping treat the disease.

St. Joseph’s/Candler has no history of treating a patient suspected of having Ebola. However, the health system is prepared to handle such a disease. Rita Allen, Infection Preventionist, closely monitors Ebola cases and trains staff on spotting the symptoms and actions to take if Ebola is suspected. The most recent training was January 2019.

“We know that we live in a very connected world, especially with Savannah being a port city, that we have a military base here that transports soldiers all around the world, an international airport, and travel on I-95 that runs the length of the East Coast. An infectious disease brewing on the other side of the globe is only a plane, car or boat ride away from showing up in our emergency departments,” Allen says.

Nurses are trained to recognize the symptoms of Ebola including:

A lot of those symptoms are similar to signs of the flu. Therefore, one of the most important things an emergency department co-worker should find out from a patient is if they’ve traveled to Africa recently, Allen says.

The Centers for Disease Control and Prevention developed a plan to prepare hospitals for Ebola, and St. Joseph’s/Candler adheres to this plan. Both hospitals have been identified as Frontline Healthcare Facilities. This involves four steps: 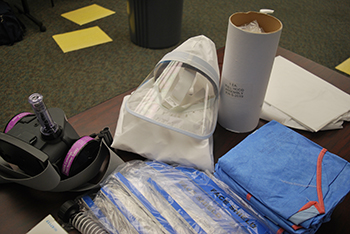 “The processes and PPE we train on can also be used with patients suspected of other serious infectious diseases and for rapid containment to keep healthcare workers, patients and the community safe,” Allen adds.

Because of the current situation in the Democratic Republic of Congo and the quickness of which Ebola can spread to anywhere in the world, it is important for healthcare workers to be trained and prepared for such a serious infectious disease.

“The reports of a worsening outbreak and the withdrawal of some resources to contain the outbreak due to security risk for the support agency workers are concerning,” Allen says. “These are good reasons to review our policy, update it and to retrain our essential ED staff with the best practices to identify a potentially serious illness early, isolate appropriately and, if necessary after further assessment, notify public health agencies for further intervention.”