What is Meniere’s disease?

One such condition that can result from too much fluid in the inner ear is Meniere’s disease. Meniere’s disease is an inner ear disorder that affects the hearing and balance system, resulting in fluctuating hearing loss and attacks of vertigo. 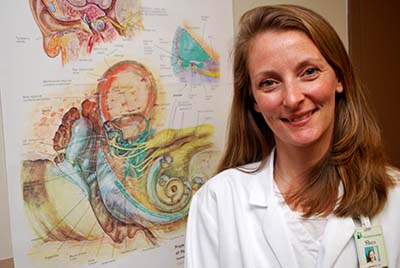 The inner ear is filled with fluid that bathes the sensory receptors for hearing and balance, explains Shea Stromberg, Au.D., CCC-A, clinical audiologist with the St. Joseph’s/Candler Center for Oto-Neurology. In healthy ears, the fluid level is constant; however, in cases of Meniere’s disease, the fluid level increases which disrupts the hearing and balance sensors. This typically results in:

“When the system heals, the vertigo subsides, the tinnitus and hearing improve and the fullness resolves,” Stromberg says. “Unfortunately, repeated attacks may result in permanent damage to the hearing and balance system.”

Attacks of Meniere’s disease may occur several times in a month with long periods between attacks. The exact cause and reason why Meniere’s disease develops is not yet known, says Renee Montaudo, Au.D., CCC-A, clinical audiologist with the St. Joseph’s/Candler Center for Oto-Neurology.

Research proposes the disease occurs due to circulation problems, viral infections, allergies, an autoimmune reaction, migraines or even a genetic connection. Researchers know that certain triggers may cause Meniere’s symptoms such as salt, caffeine, processed cheese, foods with nitrates and alcohol.

Meniere’s disease is rare with about 200,000 cases reported each year in the United States. However, because of the risk of hearing loss and quality of life due to balance disorders, it’s important to talk to your physician, an Ear, Nose and Throat specialist or an audiologist if you experience any symptoms of Meniere’s disease.

“Meniere’s disease can develop in anyone at any age,” Montaudo says, “but it is more likely to happen in adults between 40 and 60 years of age.” 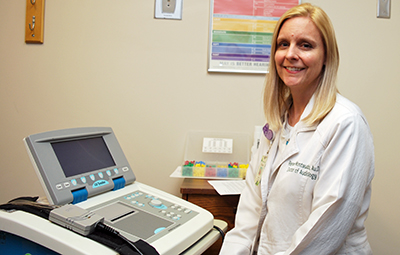 At St. Joseph’s/Candler Center for Oto-Neurology, our audiologists can perform specialized tests if Meniere’s disease is suspected. Hearing tests can show variable patterns of hearing loss. Other tests, such as VNG (videonystagmography) and VEMP (vestibular evoked myogenic potential), assess the balance system for functional abnormalities in the affected ear. The results of the tests, coupled with a thorough case history of symptoms, help your physician make an accurate diagnosis and develop an effective medical treatment program, Stromberg says.

Unfortunately, there’s no cure for Meniere’s disease. Symptoms can be managed by an ENT specialist. The most conservative long-term treatment for Meniere’s disease involves a reduced-sodium diet and diuretics, a medication that helps control water retention in the body, Stromberg says. The goal of this treatment, Stromberg says, is to reduce inner ear fluid pressure.

There is a more aggressive treatment that injects a medication into the inner ear, primarily destroying the balance receptors, which resolves attacks of vertigo. Vestibular and balance rehabilitation therapy is typically necessary to relearn how to balance following this treatment option, Stromberg says.

“If you are concerned about Meniere’s disease, you should discuss your concerns with your physician so he or she may refer you to an Ear, Nose and Throat physician for further evaluation,” Montaudo advises.

Learn more about the Center for Oto-Neurology.