What is Guillain-Barre Syndrome?

For most, it starts out as tingling or weakness in the hands or feet. Over a couple of days or weeks, it can progress quickly to the point where it affects ones breathing, ability to walk and even heart rate.

Guillain-Barre Syndrome (GBS) may be rare, but the onset of it can be quite sudden and unexpected.

Matt Fredericks knows this all too well. It started out as trouble sleeping and the feeling that his hands and feet felt like pins and needles. His joints were on fire. Even his taste buds didn’t seem to be working. 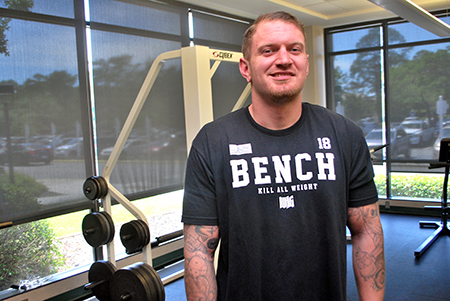 What Matt didn’t know was he had developed a disorder so rare that only about 1 in 100,000 people develop it – Guillain-Barre Syndrome. “I had never even heard of it,” the 27-year-old says.

What is Guillain-Barre Syndrome?

Guillain-Barre Syndrome is a type of neuropathy, which is a broad term for damage to the nerves, explains Dr. Jonas Vanags, neurologist with St. Joseph’s/Candler Physician Network – Neurology.

Also called acute inflammatory demyelinating polyradiculoneuropathy (AIDP), Guillain-Barre Syndrome is an autoimmune disorder in which a person’s own immune system makes antibodies that attack the nerves in focal spots, Dr. Vanags says. The part of the nerve these antibodies first attack is the myelin, or insulation of the nerve. If identified quickly, the damage to the nerve can be repaired. However, if untreated, GBS can affect the insides of the nerves, called axons, and cause prolonged weakness.

“You cannot live without your nerves. They control the ability of the central nervous system (your brain and your spinal cord) to communicate with your muscles,” Dr. Vanags says.

Guillain-Barre Syndrome is sometimes triggered by a challenge to the immune system such as an infection. Symptoms of GBS usually appear days or weeks following a respiratory or GI infection, Dr. Vanags says.

“We believe the immune system is challenged and makes antibodies to fight off an infection and something goes haywire and those antibodies then attack the nerves in focal spots,” Dr. Vanags says. 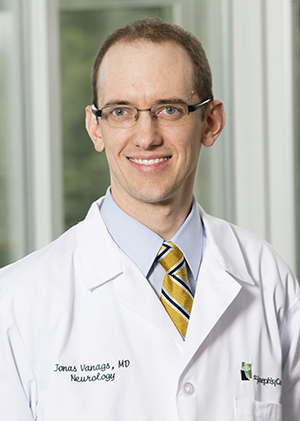 Each person can experience different symptoms of Guillain-Barre Syndrome. Weakness and tingling in the hands and feet that progresses up through the legs, arm and upper body is usually the first sign of the syndrome.

Symptoms can worsen such as:

“Recognizing the disease and treating it before it becomes severe can significantly impact recovery,” Dr. Vanags says. “If you are having unexplained weakness in your arms and legs quickly, you should seek medical attention.”

The road to recovery following a GBS diagnosis is not easy or immediate, Dr. Vanags admits, but most people fully recover from the disorder following treatment and rehabilitation.

Approximately 80 percent of patients return to very good functioning. Around 15 percent may experience disabling symptoms that may affect their ability to walk, or they may have painful sensations requiring continued treatment. For less than five percent of patients diagnosed with GBS, the disorder can be fatal.

Medications and treatments are available to treat the immune system so patients can walk or breathe again on their own. Treatment options may include:

A large majority of GBS patients also will need rehabilitation therapy as they start to feel better. Inpatient and outpatient rehab helps patients regain their strength so they can walk again and do other functions of daily living.

Matt Fredericks had only been in Savannah visiting his sister and nieces for a day before he came to the Candler Hospital emergency department with his debilitating symptoms. The power weightlifter was so weak, he was unable to pick up his 2-year-old niece.

He couldn’t blink his eyes and therefore was unable to sleep. He was so weak, he couldn’t walk or use his arms or even roll over.

And all this happened in just a matter of a couple of weeks.

Matt would end up spending nearly eight weeks transitioning from the ED to ICU to PCU to acute care to inpatient rehab before he was well enough to go back to his sister’s.

“I never thought I was going to get out. I was so weak,” Matt says. “I couldn’t believe this was happening to me and kept asking, ‘Why me?’ And then one day I decided I can sit here and keep asking ‘Why me?’, or I can get up and do what I have to do to get better.”

Among Matt’s motivation to get better were St. Joseph’s/Candler therapists. They worked with him bedside, in the inpatient rehab facility and, once released, in outpatient rehab. He went from wheelchair to walker to needing no assistance.

“They told me I could do it and believed in me and saw how fast I was improving even when I didn’t,” Matt says. “They didn’t give up on me.”

Matt has been out of rehab since mid-April. He’s gained back 20 of the 50 pounds he lost during his battle with GBS, and he’s back in the gym; although not the two hours a day, five days a week he once did. He also plans to one day get back to power weightlifting.

Even when the light at the end of the tunnel seemed dim, Matt kept a positive attitude. He encourages anyone diagnosed with Guillain-Barre Syndrome to do the same.

“This has definitely been an experience I will never forget. It’s been life changing,” Matt says. “Everyday things I value now. You don’t know what you have until you literally have nothing. Now it’s my goal to get back to 110 percent and be better than I ever was before.”