Flesh-eating bacteria: Is it safe to go in the water?

Do news reports and social media posts about flesh-eating bacteria have you scared to go in the water?

That’s probably an overreaction. There are a lot of misconceptions about flesh-eating bacteria, beginning with the name.

Necrotizing fasciitis is often referred to as flesh-eating bacteria but that is inaccurate, says Dr. Ana María Concepción, infectious disease physician and current chief of staff at Candler Hospital. 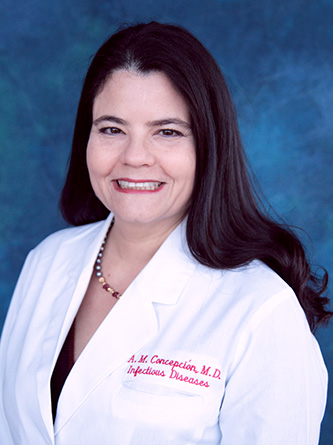 Necrotizing fasciitis is an infection of the skin and the deeper tissue, including fat and connective tissue, sometimes going down to muscle, Dr. Concepción explains. Necrotizing means death of the tissue. Fasciitis means inflammation of the fascia tissue. The skin and the tissue are not literally eaten away, but the bacteria that cause necrotizing fasciitis leads to the death of the fascia.

Bacteria most commonly enter the body through a break in the skin including cuts and scrapes, insect bites, puncture wounds or surgical wounds.

Necrotizing fasciitis is fairly rare, but should be taken seriously, Dr. Concepción says. It spreads quickly in the body and can lead to sepsis, shock and organ failure. It also can cause the loss of limbs, most commonly the leg, and even death.

Related Article: What is sepsis?

Since 2010, the Centers for Disease Control and Prevention reports approximately 700 to 1,200 cases of necrotizing fasciitis occur each year in the United States just due to group A strep. Even with treatment, up to 1 in 3 people die from the infection, according to the CDC.

Who can get necrotizing fasciitis?

Those who recently had surgery or have a wound should take proper care to ensure the area does not get infected.

Symptoms of necrotizing fasciitis usually appear quickly, over just a couple of days as opposed to weeks, Dr. Concepción says. Symptoms may include:

If you experience any of these symptoms, especially if you recently had an injury or surgery, Dr. Concepción says see your doctor immediately or go to the emergency department.

How is necrotizing fasciitis treated?

Necrotizing fasciitis is a surgical emergency and antibiotics are needed as well.

So is it safe to go in the water?

Yes, it’s safe to go in the water but do pay attention to water advisories, Dr. Concepción says. Bacteria can live in water. It can enter the body through a wound or by swallowing or accidentally inhaling the water, says Dr. Concepción.

In Georgia, the Coastal Health Department and the Coastal Resources Division of the Georgia Department of Natural Resources routinely test coastal beach waters for the presence of potentially harmful bacteria. If bacteria levels are elevated, an advisory sign will be placed on the beach and notification sent through local media and social media.

That doesn’t always mean the beach will be closed, so it’s important to pay attention to these water advisories and consider avoiding the area, especially if you have a recent wound.

Dr. Concepción adds that bacteria found in bodies of water don’t typically lead to necrotizing fasciitis. Most often it leads to a gastrointestinal illness.