You’re most likely familiar with diabetes. It’s the condition in which the body doesn’t make or use insulin correctly.

What you may not realize is that diabetes affects women differently than men.

Globally, there are more than 425 million people with diabetes, of which 90 to 95 percent have type 2 diabetes, says Amy Wojciechowski, MSN-Ed, RN, BS, CDCES, St. Joseph’s/Candler certified diabetes care and education specialist. There is a higher rate of type 2 diabetes in men versus women; however, women have a higher rate of diagnosis earlier than men and are at risk of more severe complications than men. 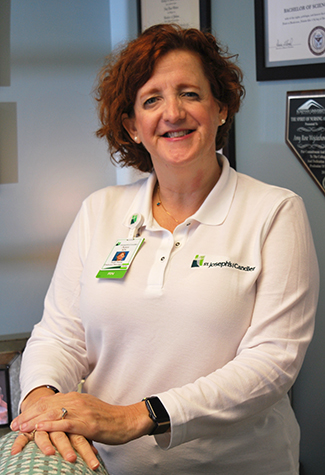 “There is a unique burden of diabetes amongst men and women throughout their lifespan,” Wojciechowski says.

Let’s take a look at just some of the differences.

Difference 1: The age of diagnosis

As boys reach puberty, those numbers typically reverse. As women age and enter menopause, their hormones change, again affecting how their bodies use insulin. This puts older women at a higher risk of developing diabetes as opposed to the same-age male counterparts.

The early warning signs of diabetes are the same for both male and female: frequent urination, constantly feeling thirsty, blurry vision and fatigue, to name a few.

Women may think that’s just a part of a busy lifestyle and put off going to the doctor, Wojciechowski believes.

“We may be thirsty because we are always running around doing things. Or we may write off the fact we are going to the bathroom a lot or have vision changes,” Wojciechowski says. “Women tend to associate things we experience differently.”

Regardless of a hectic lifestyle, if you experience any of the common warning signs of diabetes, Wojciechowski encourages you to talk to your doctor.

Lifestyle is a big risk factor for diabetes in both men and women. If you follow a poor diet, don’t exercise and smoke, you’re at an increased risk for diabetes. Family history also plays a role, but not as significantly as lifestyle and health behaviors, Wojciechowski says.

One difference in risk factors is our weight. Men tend to be diagnosed with diabetes at a lower body mass index (BMI), Wojciechowski says. Women tend to be diagnosed at higher BMIs and weights, especially those with central obesity. Wojciechowski stresses following a proper diet and exercising regularly to maintain a healthy weight throughout life.

Another risk factor to pay attention to is depression. Stress and depression can have a negative impact on our overall health, which can lead to worsening of chronic conditions such as diabetes and heart disease. Wojciechowski says women tend to worry more and have higher rates of anxiety and depression than men.

“This fact is compounded by the fact that women and men experience signs and symptoms of heart attacks differently,” says Wojciechowski. “Women often do not recognize the signs of a heart attack and/or may delay treatment, leading to a lower chance of recovery.”

In addition to more severe complications from heart disease, women with diabetes also are at higher risk of other diabetes-related complications, such as depression, blindness and kidney disease.

Diabetes can also take its toll on a person’s mental health. “In the general population, women are twice as likely as men to experience depression,” Wojciechowski says.  “If you add in the development of diabetes, women with depression are more likely to die early than women without diabetes.”

Difference 6: Conditions only in women can be risk factors for diabetes

There are certain reproductive conditions that only happen in women. For example, poly-cystic ovary syndrome, which is a hormonal disorder causing enlarged ovaries with small cysts. This condition increases a female’s risk of developing type 2 diabetes, says Wojciechowski.

Related Article: What is gestational diabetes?

Be proactive about diabetes – whether you’re male or female

Yes, there are differences in men and women with diabetes; however, it’s still a chronic condition that can affect any gender. Be proactive about your health by living a healthy lifestyle.

“Get as much exercise as possible – at least 150 minutes of moderate to vigorous activity a week,” Wojciechowski says. “And eat a sensible diet – watch the refined sugars and eat whole grains, appropriate portions of protein and carbs and eat a lot of vegetables. This all will contribute to reducing the risk of developing diabetes.”

If you have concerns or questions about diabetes, the St. Joseph’s/Candler Center for Diabetes Management offers outpatient counseling. Learn more on our website.