Expecting moms, we know it’s hard, but pregnancy should not be used as an excuse to fill up on fried, greasy food and downing a pint of ice cream every day. Honestly, you shouldn’t have the mindset that you are eating for two, says Heather Atkinson, clinical dietitian at St. Joseph’s Hospital.

“The mentality of ‘I’m eating for two’ tends to lead to overeating,” says Atkinson, who admits that as a mother of two she too struggled with weight gain during pregnancy. “You really want to focus on a healthy, balanced diet that will help mom and her baby get all the nutrients they need.” 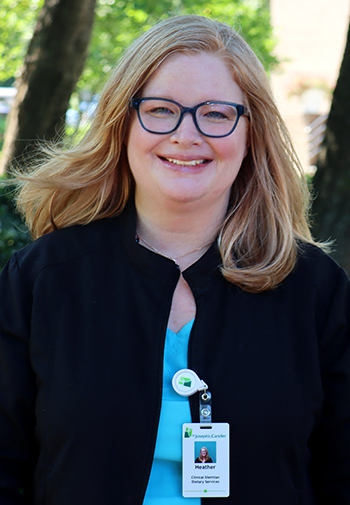 Just as you want to practice a healthy diet before pregnancy, it’s important to eat a balanced diet during as well. Your balanced diet should include fruits and vegetables, lean meats, low-fat or fat-free dairy products and whole grain breads and cereals, Atkinson says. She also encourages women trying to get pregnant or already pregnant to take a prenatal vitamin.

Seafood is good for omega-3, but make sure it’s fully cooked, and stick to two to three servings of fish a week (about eight to 12 ounces total). Avoid sushi and raw oysters, clams and scallops, as well as refrigerated smoked seafood. You also want to avoid larger, predatory fish to reduce exposure to mercury, Atkinson says, so limit white tuna, tuna steaks, swordfish and mackerel.

Related Article: Can I eat fish while I’m pregnant? A nutritionist and physician explain.

Eggs are a good source of protein, but you should also make sure they are fully cooked. Don’t eat soft cheeses, such as feta or brie, or raw sprouts, and make sure any deli meat or hot dogs are reheated, Atkinson says.

Why is this important? Because during pregnancy your immune system changes and can put you at higher risk of food-borne illnesses, Atkinson says.

“The illness itself can be worse during pregnancy because your immune system can become weaker,” Atkinson says. “It can harm the baby as well. If mom gets really sick, it can lead to pre-term labor or miscarriage.”

Here’s a breakdown according to the Centers for Disease Control and Prevention:

(It’s different if you are pregnant with twins. Click here to see that chart.)

Atkinson acknowledges BMI is not perfect, and it can be difficult to control weight gain during pregnancy, especially that last trimester, but it’s important to monitor your weight during pregnancy because gaining too much or too little can impact your and your baby’s health.

Gaining more than the recommended amount of weight in pregnancy is associated with having a baby who is born too large, which can lead to delivery complications, cesarean delivery and obesity during childhood.

It’s also harder to take the weight off after pregnancy if you gain too much, Atkinson adds.

If you gain too little, it could lead to a baby who is born too small, which puts baby at an increased risk of illness and developmental delays, as well as difficulty starting breastfeeding.

“Don’t deprive yourself of foods, but concentrate on getting the most nutritious foods by eating a healthy diet,” Atkinson says.

She suggests talking with your OB/GYN or a dietitian if you are struggling with diet and weight gain during pregnancy.

But what about the cravings? Research shows a lot of pregnant women do get cravings – you can probably ask just about any mom you know. Some scientists think it’s because of hormonal changes, Atkinson says. Another possibility is the cravings are related to something you are lacking in your diet, a certain nutrient maybe, Atkinson says.

The key is to have healthy options to combat those cravings.

“It’s really common to crave sweets – I can attest to that,” Atkinson says. “But try to go for the fruit before the milkshake and cupcakes.”

If you start to crave anything like dirt or clay, you may need to get your blood checked because that could be a sign of iron deficiency called pica that is common in pregnant women. Talk to your doctor if you experience cravings for non-nutritional items.