Having an ImPACT on concussion diagnosis

If your child suffers a head injury on the sports field or court, St. Joseph’s/Candler has an additional tool in its arsenal to help diagnose a concussion. It’s called ImPACT testing.

Tests are preformed at either Dr. Greer’s office in Pooler or by our athletic trainers who work at high schools throughout Chatham County.

ImPACT testing is mostly performed on athletes who suffer known or suspected concussions. The test is one tool to help diagnose a concussion and can help determine whether or not an athlete is ready to return to play. Occasionally, the test may be used following an occupational injury or car accident where a concussion is suspected or there are questions as to whether or not the person is ready to return to work.

ImPACT testing has been around for more than 15 years. It’s FDA approved and used by sports medicine doctors and athletic trainers around the country. Here, Dr. Greer uses ImPACT testing during a concussion assessment at his Pooler office. Additionally, St. Joseph’s/Candler has athletic trainers in various schools across Chatham County who can perform testing right there at the school. 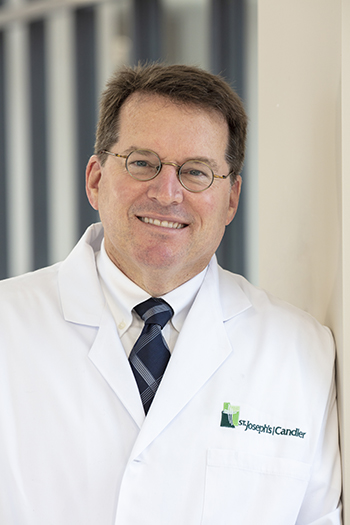 How the test works

The test is computerized so all you need is a computer, mouse and good WiFi, Dr. Greer says. The test is online, made available through the company who developed it, ImPACT.

“It tests visual memory and verbal memory. It shows patterns and then you have to say whether or not you saw this pattern before,” Dr. Greer explains. “It tests cognitive function, so it may ask you to say what word is this or what color is that. It may have the word green but in red letters, and you have to very quickly tell the difference between the two.”

There is no time limit to the test, but it is a timed test to help gauge your reflexes and reactions.

Once you complete the test, Dr. Greer evaluates the results which are then compared to either a baseline test, if you did one without a concussion previously, or results of your age-matched peers, which is data collected in all different age groups across the country.  The result is a percentile of either your baseline test or age-matched peers.

“The hope is that you should get at least 50th percentile because that’s average,” Dr. Greer says.

But he also takes each patient into consideration. Some patients just may not test well, regardless of a concussion or not. They may never reach the 50th percentile, so does that mean they can never return to sports?

Likewise, some kids may test in the 98th percentile without a concussion, so you may think twice if they get just at 50 percent before sending them back into action.

That’s why ImPACT testing is just one of many tools to diagnose a concussion and determine safe return to play, Dr. Greer says.

A concussion is a type of traumatic brain injury caused by a bump, blow or jolt to the head or a hit to the body that causes the head and brain to move rapidly back and forth. A sudden movement that causes the brain to bounce or twist in the skull can create chemical changes in the brain and damage brain cells.

Concussions should be taken very seriously and never ignored. The long-term effects of concussions, especially multiple concussions, affect thinking, memory, learning, coordination and balance, speech, hearing, vision and emotions. Some severe cases can lead to blood clots in the brain, death or suicide.

Related Article: Would you know if you had a concussion?

One way to know you have a concussion is through symptoms. Some of those include:

If you are a parent, coach or athletic trainer familiar with the person, you can also watch for any abnormal behavior or emotions, Dr. Greer adds.

However, just because you feel better, doesn’t mean you are. A study found that 39 percent of people who suffer a concussion don’t realize they are still experiencing the effects of the injury, Dr. Greer says. These are the people ImPact testing hopes to find.

“Because if you get a second concussion, then that could be a very bad thing,” Dr. Greer says. “Around 60 percent of people who suffer either permanent brain damage or death from a head injury were suffering with a concussion when they had that brain injury.”

As mentioned, ImPACT testing is just one tool to diagnose a concussion. Failing the test does not automatically mean you have a concussion, because some patients, especially those with conditions such as ADHD or dyslexia (whether diagnosed or undiagnosed) may not test well regardless. Others may reach the 50th percentile or higher, but still have a concussion.

So when Dr. Greer sees a patient suspected of having a concussion, he does several tests including a full neurological exam, testing their recent memories, process testing, balance testing, cognition testing, as well as ImPACT testing. He also takes time to talk to the patient, as well as the parents and, if he can, athletic trainers.

Getting back on the field or to work

If you are diagnosed with a concussion, it doesn’t mean you have to hide in a dark room for days at a time.

“If you get someone doing some activity within 72 hours of their concussion, we found they get back to play faster, get back to normal faster,” Dr. Greer says. “We don’t let them get back to contact, but we get them to at least do something so they will get better.”

But it’s not without extreme caution, he adds. Players will start out doing exercises specific to improve their symptoms. Once they are asymptomatic, they will do more and more activities and be pushed a little harder. If they continue to improve with no symptoms in 24 hours, the next step is non-contact practice. If 24 hours later they are still asymptomatic, then they can return to contact practice. A player is not allowed to play in a game until 24 hours after a contact practice with no symptoms, Dr. Greer says.

“So it takes a good six or seven days. It’s possible to get a concussion on a Friday night and be back the next Friday night, but it’s unlikely,” Dr. Greer says. “We take treating concussions seriously, and again, I’d say the biggest thing is that 39 percent of people who don’t realize they are still having symptoms.”

Related Article: Education may be the best tool to protect against concussions

If you think you or your child may have experienced a concussion or would like more information about ImPACT testing, you can make an appointment with Dr. Greer by calling the office at 912-737-2450 or requesting one online now.