What is gestational diabetes?

A diabetes diagnosis during pregnancy can be a scary thing for most women. However, pregnant women with gestational diabetes (diabetes during pregnancy) can still have healthy babies with help from their physician and by taking steps to manage blood sugar levels.

Gestational diabetes is a type of diabetes diagnosed in a pregnant woman who did not have or know she had diabetes prior to becoming pregnant. It is typically diagnosed in the middle of pregnancy, between 24 to 28 weeks, explains Dr. Aishawarya Sarkar, OB/GYN at Curtis V. Cooper Primary Health Care Women’s Center. Dr. Sarkar sees patients at the center's office in the Professional Office Building on the Candler Hospital Campus, where she also delivers babies at the Mary Telfair Women’s Hospital. 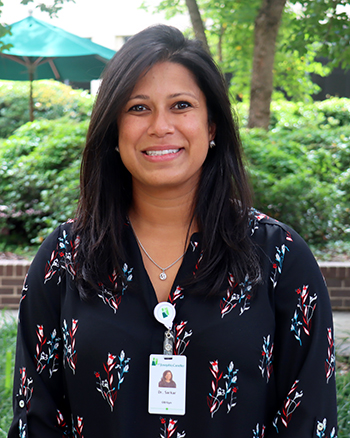 Gestational diabetes is common, occurring in more than 200,000 pregnancies each year in the United States and comes with risk factors for both mom and baby that should be taken seriously.

During pregnancy, the placenta produces a hormone that can affect how a woman’s body uses insulin, Dr. Sarkar says. Gestational diabetes is not caused by having too little insulin. Instead, this hormone – called human placental lactogen – keeps the body from using the insulin as it should. This is called insulin resistance.

Who’s most at risk of developing gestational diabetes?

Any pregnant woman is at risk of developing gestational diabetes, that’s why all women are tested for the condition at their 24- to 28-week appointment. However, there are some factors that can put you at even higher risk including:

“There’s the misconception that ‘I’m eating for two’ and you can eat as much as you want, but it’s really only about 300 more calories than the regular person, which is really not that much when you think about it,” Dr. Sarkar says. “It’s a good idea to maintain a healthy diet and mindset during pregnancy. Exercise is wonderful during pregnancy – walking, jogging, yoga are all safe to do while pregnant.”

What are signs of gestational diabetes?

Unfortunately, gestational diabetes does not present with any specific signs and symptoms. This is why it is so important for all pregnant women to be screened during their pregnancy, Dr. Sarkar says.

How do you test for gestational diabetes?

All pregnant women will be tested for diabetes between the 24th to 28th week of pregnancy, unless they were diagnosed with type 2 diabetes prior to becoming pregnant. It starts with a screening test:

When that happens, then there’s a follow-up confirmatory test:

How do you treat gestational diabetes?

Your physician will determine the best course of treatment, but Dr. Sarkar typically recommends lifestyle changes initially – following a proper diet, such as eliminating or limiting sodas and sugary foods and eating mostly vegetables, fruits and lean meats. She also recommends regular exercise.

Related Article: VIDEO: Modified exercises you can do at any point in your pregnancy

If blood sugar levels do not improve your doctor may recommend certain medications or insulin to control those glucose levels.

“Not everyone is a great candidate to start with insulin,” Dr. Sarkar says. “We really try to focus on lifestyle changes or for some it may be easier to start with medications.”

What are complications of gestational diabetes?

If it’s not diagnosed, babies are at an increased risk of growing abnormally, Dr. Sarkar says. They can have more fat in their shoulders and upper body, which can make a vaginal delivery more difficult and traumatic, or could require a C-section delivery. Gestational diabetes in mom also can lead to the baby’s difficulty with controlling their blood sugars as well.

Moms who develop gestational diabetes are at higher risk of one day having type 2 diabetes, especially if there’s a family history of the disease. Dr. Sarkar encourages all of her patients to see a primary care physician for an annual checkup.

However, if you develop gestational diabetes that is not a guarantee you will get type 2 diabetes. Gestational diabetes should go away within six weeks postpartum. You’ll have a six-week postpartum checkup with your doctor who will test your glucose levels again. This time it’s a 75-gram glucose load that you drink and then have your levels checked one hour and two hours later.

If levels are elevated after both tests, then the patient likely has a glucose intolerance or they may have type 2 diabetes and just didn’t know it. Dr. Sarkar recommends those patients to a primary care physician for further treatment and management.

Related Article: Are you seeing a healthcare provider annually?

“There are steps you can take to prevent gestational diabetes. It starts by going into a pregnancy as healthy as you can be, and then during pregnancy, maintaining a healthy lifestyle with proper diet and exercise,” Dr. Sarkar advises.