What does it mean if I have dense breasts?

St. Joseph’s/Candler adds the latest in supplemental breast screening with the Automated Breast Ultrasound System at the Telfair Pavilion

More than 40 percent of women have what’s considered dense breasts. That means their breasts are made up of at least 50 percent of fibroglandular tissue as opposed to fat.

It also means your lifetime risk of getting breast cancer increases four to six times of that of a woman who does not have dense breasts. In fact, more than 70 percent of breast cancers form in women with higher dense breast tissue.

At St. Joseph’s/Candler, we’ve added a new weapon to our arsenal of breast imaging services. It’s called Automated Breast Ultrasound (ABUS). The supplemental screening tool for women with dense breasts is located at the Telfair Pavilion at Candler Hospital. 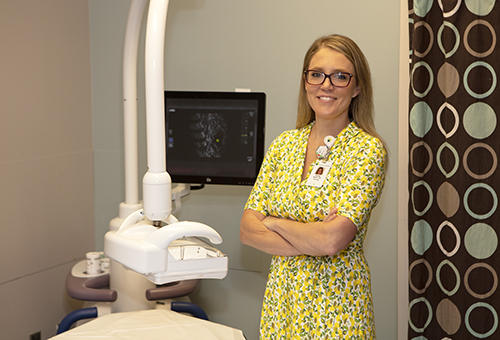 “ABUS is a great, innovative new technology,” says Dr. Jordan Dixon, radiologist with St. Joseph’s/Candler. “The overall goal with breast imaging is to find cancers smaller when they are more treatable. This can definitely help do that.”

It all starts with mammography, which is the gold standard for breast cancer detection. Breast ultrasound will only be recommended in addition to mammography, Dr. Dixon says. Mammography also is the only way to determine if you have dense breasts or not, she adds.

Related Article: Where can I get a mammogram?

Mammograms are white and gray on the screen. The gray is the fat that everyone has in their breasts and the white is the dense, fibrous, hormonally-responsive tissue, Dr. Dixon says. The density of the breast is determined visually based on how much of the white takes up the breast on that mammogram image.

Then the radiologist will determine which of four categories a woman’s breast falls:

B – Some scattered areas of fibroglandular tissue

Categories A and B are not dense because they have more fat relative to dense breast tissue, Dr. Dixon explains. Classes C and D are considered dense breasts, which as mentioned applies to more than 40 percent of all women.

Within 30 days of your mammogram you will receive a letter letting you know which category applies to you, as well as the results of the screening. St. Joseph’s/Candler has been practicing this for several years, even as both Georgia and South Carolina enacted this notification into law.

If you have class C or class D density, we will recommend supplemental screening. Your healthcare team may also consider other factors, such as family history, to determine the best course of preventative screening.

The American College of Radiology recommends annual mammography for all women over 40. If you have dense breasts, you should consider additional screening such as ABUS, which can be done on the same day as your yearly mammogram, Dr. Dixon says. High risk women may want to stagger screening, adding breast MRI six months following mammography and ultrasound.

“It does scare a lot of people because they know dense breasts increase the lifetime risk of breast cancer and decrease sensitivity of mammograms detecting those small, early cancers,” Dr. Dixon says. “I say keep up with regular screening. Keeping up with that and doing supplemental screening if you do have dense breast tissue makes, you feel empowered. It means we are constantly monitoring for cancer, and we’ll find the smallest cancers and save the most lives.” 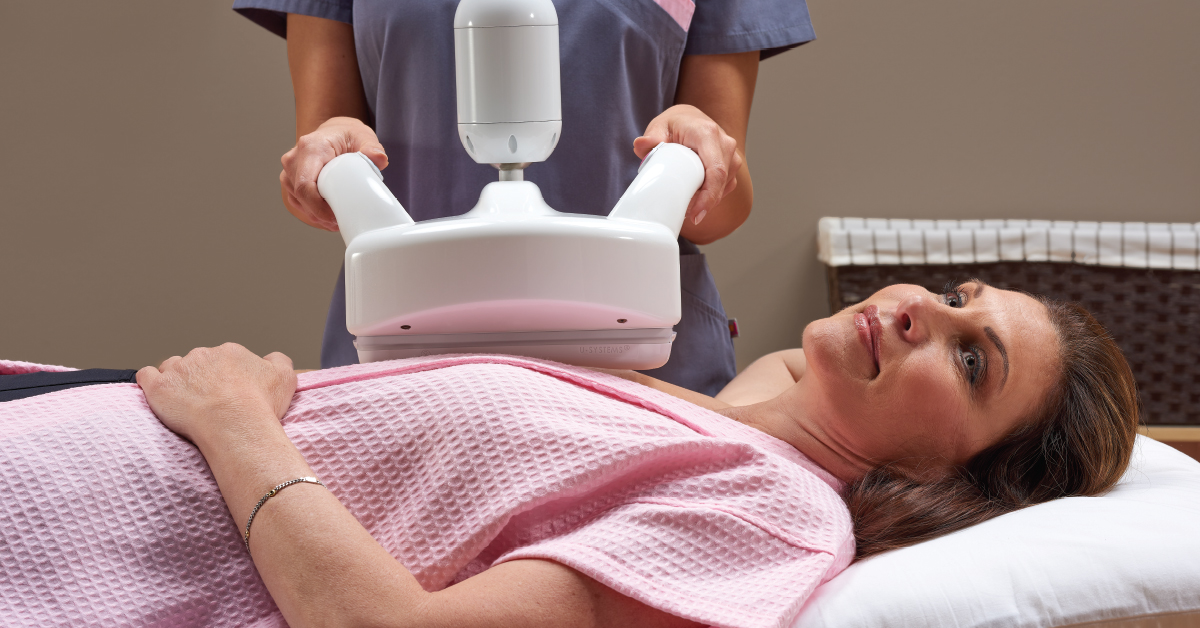 The Telfair Pavilion added Invenia ABUS 2.0 (Automated Breast Ultrasound System) earlier in 2022. The machine is FDA-approved for breast cancer screening in addition to mammography for women with dense breast tissue and who are asymptomatic, meaning they don’t have a lump or any pain, Dr. Dixon says.

Ultrasound is a non-invasive and efficient way to look inside the body at organs and soft tissue. There is no exposure to radiation. Instead, ultrasound uses high frequency sound waves to create detailed images of the area being examined.

With ABUS, a paddle shaped device is placed over the breast as the patient lays back with their arm over their head. A transducer slides back and forth taking thousands of images, Dr. Dixon says.

There are many benefits to ABUS as opposed to hand-held breast ultrasound. One is the number of images produced, going from maybe eight images the previous way to literally thousands. Also, it requires less time for the patient. ABUS takes about 15 minutes per breast as opposed to about an hour per side.

That’s why St. Joseph’s/Candler invested in screening modalities like ABUS. The Invenia ABUS system is designed to enhance the consistency, reproducibility and sensitivity of breast ultrasound, demonstrating a 37.5 percent improvement in cancer detection in women with dense breasts without prior breast intervention.

“There’s really nothing you can do about having dense breasts. It’s mostly due to genetics and age,” Dr. Dixon says. “It’s not required, but if you do have dense breasts, we certainly recommend supplemental screening. Keeping up with mammograms and additional screening can find cancers early. There’s a lot of power in knowledge and education.”

For more information or to schedule your annual mammogram, call the Telfair Pavilion at 912-819-7000.