Because of her 37-year dedication to St. Joseph’s/Candler and focus on service to both co-workers and patients, Debbie Shumans is the 23rd McAuley Award winner. 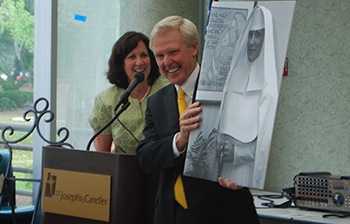 “Debbie is continuously promoting a culture of ‘always’ - treating everyone with dignity and respect,” wrote one of her co-workers. “She has a spiritual gift of hospitality and it is reflected in the way she engages with fellow co-workers.”

Another said that Shumans is “always gracious and welcoming, treats everyone with respect, warmth and usually a little bit of humor. She makes everyone feel at home.”

This year, 75 St. Joseph’s/Candler co-workers were nominated by their peers to receive the distinguished honor. Nominations are based upon an individual’s ability to illuminate the health system values of compassion, quality, integrity, courtesy, accountability and teamwork.

As the 2016 Catherine McAuley Award winner, Shumans’ name will appear on the bronze McAuley plaque displayed in the lobbies of St. Joseph’s Hospital and Candler Hospital. She will receive a $3,000 honorarium, a one-year free parking pass in the location of her choice, a one-month cafeteria meal pass, a gift certificate for massages at the Center for WellBeing, a St. Joseph’s/Candler watch and the McAuley pin.

Along with her duties as Executive Secretary for the Vice President of Human Resources, Shumans also represents SJ/C with many additional activities, including developing concepts, recruiting volunteers, and helping to build the floats for the St. Patrick’s Day parade (which have won an award every year since 1995) and the Martin Luther King, Jr. Day parade.

Shumans also coordinates the Mercy Day celebration with the Sisters of Mercy, volunteers at Candler Clays and Smart Women for the SJ/C Foundations, and serves on the Board of Directors for Mercy Federal Credit Union.

Outside of SJ/C, Shumans is very active in her church, St. George’s Episcopal, and is part of a knitting group that makes prayer shawls for the sick and crocheted hats for newborns. She also makes comfort pillows for women who have recently had a mastectomy.

WHY THEY NOMINATED DEBBIE SHUMANS:

“Debbie has an attitude that is always positive and she looks for ways to say yes when someone is in need.”

“Debbie has a strong sense of right and wrong and is someone who protects the integrity of our processes and policies.”

“She is a poster child for service and someone deeply devoted to her family and her church. She is very active with a group that knits prayer shawls for the sick and caps for newborns, and makes ‘comfort pillows’ for women that have recently had a mastectomy.”