The 2018 SmartWomen Luncheon & Expo smashed records and raised $184,582 through event proceeds, grants and donations so that women who are uninsured or underinsured can receive lifesaving mammograms and other breast health services. 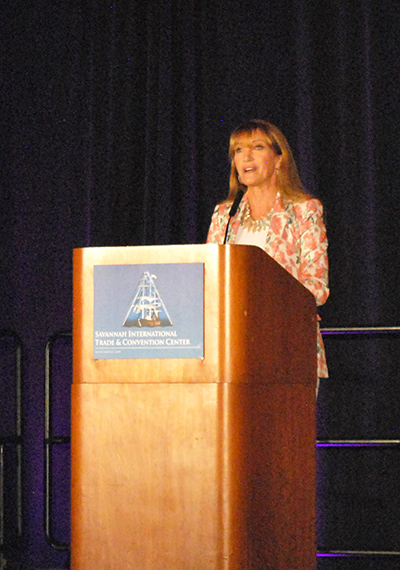 SmartWomen is an annual fundraiser for St. Joseph’s/Candler’s Telfair Mammography Fund, which provides mammograms and other breast care services for those who cannot afford those life-saving services.

“Each year we see more uninsured and underinsured women in need of the services provided by the Telfair Mammography Fund,” said St. Joseph’s/Candler President & CEO Paul P. Hinchey. “We do not want women skipping their mammograms because they don’t have insurance. I want to thank the entire community for coming together and helping us raise these funds.”

Actress and philanthropist Jane Seymour, an Emmy® and Golden Globe® winner and recipient of the Officer of the British Empire in 2000, was the keynote speaker this year. Seymour has proven her talents in all media, the Broadway stage, motion pictures and television.

In our region, approximately 20 percent of the population is uninsured or underinsured. The goal of the Telfair Mammography Fund is to ensure that all women have access to mammography and other services, even if they have no insurance or high deductibles or copays. The SmartWomen Luncheon & Expo has raised hundreds of thousands of dollars for the Telfair Mammography Fund to meet this goal since its inception more than a decade ago.

“This year’s SmartWomen was such a great event with actress Jane Seymour,” said Terri Doyle, Chairwoman of SmartWomen. “But even more amazing were the people who attended, the volunteers and the sponsors who helped us make it so successful so women in our region can have the security knowing they can get mammograms regardless of their ability to pay.”