The event has raised more than $1.3 million since its inception, benefitting the Nancy N. and J.C. Lewis Cancer & Research Pavilion at St. Joseph’s/Candler. J.E. Dunn Construction was the presenting sponsor and Mingledorff Family Trust was the gold sponsor. Shooters and guests came from all over the region as well as South Carolina and Florida. 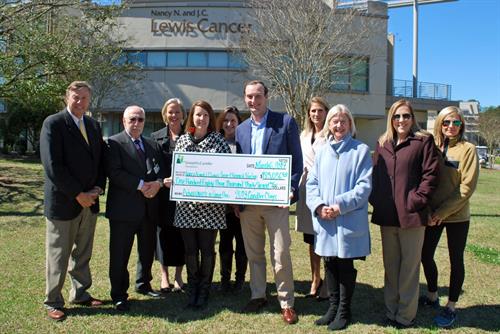 “The effort from our volunteers and the response from the community this year was absolutely amazing,” said Heather Garber Smith, Chair of the 2019 Candler Clays Committee. “Without them we would never have had this record setting year. It is humbling to think of how much this will help cancer survivors in our region and the advances in cancer care this money will support. I am thankful to all who helped make this year’s event the best yet!”

Candler Clays is an annual two-day event combining a charity auction of items donated by local merchants and a clay shooting competition at the Forest City Gun Club. This year 290 shooters on 77 teams competed.

“Along with an enthusiastic  group of volunteers, Candler Clays’ corporate and in kind sponsors have embraced this event year after year to support our patient care initiatives,” said Vernice Rackett, executive director of the St. Joseph’s/Candler Foundations. “Candler Clays now enjoys a regional following with participants traveling from  Atlanta, Greenville, S.C.,  Palm Beach, Fla., Bluffton, and Hilton Head.   We are grateful for their loyalty.”

Prizes were presented to the top male and female shooter as well as to 1st and 2nd place teams and Lewis Class C & B.  The winners were as follows:

Each year the event honors a survivor or memorializes someone who died of cancer. This year we honored the life and courage of Roddy Beasley. Roddy left this world much like he lived his life, characteristically understated, gently and in the most dignified manner.

Born in Savannah, he grew up downtown where he attended Massey Elementary School and then high school at the Blue Ridge School in North Carolina. Roddy attended Wake Forest University on a swimming scholarship before joining the Marine Corps. He graduated from Armstrong College. Roddy married the love of his life, Angela Maggioni, and they were a team for fifty years. They have two children, Alyson Beasley Spinks (Brad) and Jeffrey R. Beasley Jr.

Roddy owned and operated Maggioni Seafood, Inc., a 150-year-old family seafood and oyster business located in St. Helena, S.C. An outdoorsman and dog lover, he was committed to the culture and the wellbeing of the Lowcountry.

About the St. Joseph’s/Candler Foundations

The St. Joseph’s/Candler Foundations support vital clinical programs, assist in the purchase of cutting-edge medical technology and enhance outreach programs designed to keep people in our community healthy. This important educational component helps our community be more proactive about their health and disease management.

To learn more or to make a donation, visit www.sjchs.org/foundations.