Her drive inspires her co-workers, her spirit comforts her patients, and her personality will fill any room.

That is why she was awarded the 26th annual McAuley Award from St. Joseph’s/Candler. 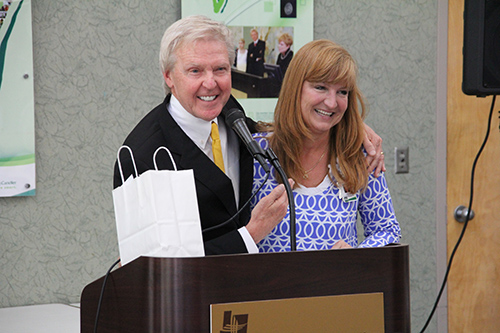 “If there is a need, Melanie will do all in her power to respond,” said a co-worker who nominated her. “Being with Melanie is being in the presence of a spirit-filled woman with zest for life - and it is contagious.”

Paul P. Hinchey, President & CEO of St. Joseph’s/Candler, honored Willoughby in a surprise announcement Thursday, April 18. The McAuley Award is presented annually to the one St. Joseph’s/Candler co-worker who best exemplifies the mission and values of the health system. The award is named in honor of Catherine McAuley, who founded The Sisters of Mercy in the hopes of bringing education, healthcare, social justice, and spiritual guidance to those in need.

As the 2019 McAuley Award winner, Willoughby’s name will appear on the bronze McAuley plaque displayed in the lobbies of St. Joseph’s Hospital and Candler Hospital. She will receive a $3,000 honorarium, a one-year free parking pass in the location of her choice, a one-month cafeteria meal pass, a gift certificate for massages at the Center for WellBeing, a St. Joseph’s/Candler watch and the McAuley pin.

This year, 72 St. Joseph’s/Candler co-workers were nominated by their peers for the distinguished honor. Nominations are based upon an individual’s ability to illuminate the health system values of compassion, quality, integrity, courtesy, accountability and teamwork.

Willoughby has been in the health system for 34 years, starting as a nurse. She’s worked in critical care and she started the disease management program, eventually working up to Director of Health Management. She is known throughout the system for her boundless energy and leadership.

She has two children who both entered the health care field.

Beyond St. Joseph’s/Candler, she is very involved in the community, sitting on leadership boards at the United Way, working with Healthy Savannah and the Savannah-Chatham County Public School System.

She graduated from St. Vincent’s Academy and remains very loyal to the school and active in projects there.

At St. Joseph’s/Candler, she manages all the wellness programs, diabetes management and cardiac rehab. Willoughby works closely with Savannah Business Group companies such as the City of Savannah, Georgia Ports, Colonial Oil and JCB to help contain their healthcare costs. She is often seen jumping in with her team to do the annual physical evaluations of every Savannah Fire fighter.

This is the ninth time she has been nominated for the McAuley Award.

What Her Co-Workers Said About Her:

“The environment in her departments reflects her spirit. You can feel it when you walk in. Patients are encouraged to do well and succeed in their efforts. She elicits teamwork from her staff and expects excellence. She takes little credit for herself and always says, ‘We are a team.’”

“Melanie is a real daughter of Catherine McAuley. She sees a need and jumps in to take care of it--and through her leadership she is able to get others to help too.”

“When others are still planning and trying to figure out a way to do it, Melanie is already trying to accomplish the task. It reminds me of the story of Catherine McAuley being compassionate but doing it, or finding out a way to work around to get it done.”

“She lets the people around her know they are a big deal, that they matter. How they work, where they work and how they collaborate with each other matters to her.”

“She works hand in hand with her staff and doesn’t expect anything from them she is not willing to do herself. She sets a shining example of leadership and volunteerism as well as caring every day.”