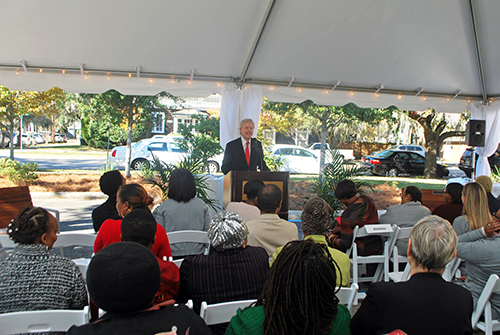 There was a disparity in access to health care and a lack of cultural health information. That’s why St. Joseph’s/Candler opened the African-American Health Information & Resource Center  in 1999, the first such center run by a private institution.

The concept behind St. Joseph’s/Candler’s African-American Health Information & Resource Center (AAHIRC) grew out of discussions conducted by visionary leaders at St. Joseph’s/Candler and Savannah State University. At the time U.S. Surgeon General David Stacher noted the AAHIRC and said such facilities would change the way healthcare is delivered in the future.

Since then the AAHIRC has provided free health screenings and seminars to ensure that people are aware of how healthy they are and ways to improve their health and better manage diseases. Strategically located in an area of Savannah with more than 50 percent of the households below the poverty line, almost 200,000 people have used the AAHIRC in the last 20 years.

“It was our intention to instill that power so that people could harness those skills and access to health information to positively impact their own health and wellbeing,” said Paul P. Hinchey, President & CEO of St. Joseph’s/Candler. “The core intent of the African-American Health Information & Resource Center is to design programs using information technology and educational resources that lead to positive health outcomes for African Americans.”

Over time, this strategy has and will continue to positively impact the overall community wellness by improving the health profiles of Savannah’s minorities and poor, and thus reducing the gaps in health status and health outcomes between affected residents.

The center’s focus has changed as the needs of the community changed. In the future it will continue to evolve to meet the community’s needs.

St. Joseph’s/Candler creates a triad of health care: mind, body and spirit. The principle is that a person’s health cannot be viewed in a vacuum. External factors like education, employment, culture, financial status and health coverage can be obstacles to good health.

The AAHIRC examines the total person, a holistic view, to try to remove those external factors.

What the African-American Health Information & Resource Center does

The numbers covering 20 years of service at the AAHIRC:

Why is this important?

Two people were instrumental in getting AAHIRC started and two park benches were dedicated to them as a token of appreciation.

The inscriptions on those benches read:

Dedicated in loving memory to
Sister Virginia Gillis, RSM
(October 24, 1933 – March 9, 2012)
whose inspirational wisdom and innovative vision as
Vice President of Mission Integration at St. Joseph’s/Candler led to the conceptualization, development and ultimate establishment of the African-American Health Information & Resource Center. She possessed a selfless passion for helping those in need, and became a recipient of the love she inspired in others.

Dedicated in fond memory of
Dr. Clifford Hardwick
(September 4, 1927 ~ November 18, 2018)
whose unquenchable thirst for knowledge led to his lifelong career as an educator.  He inspired generations of students towards the pursuit of betterment through the power of education. As an ambassador and steward of the African-American Health Information & Resource Center, Dr. Hardwick displayed an outstanding commitment and unparalleled service as the first co-chairman of the program.