Just like the Masters at Augusta National, St. Joseph’s/Candler’s McAuley Award ceremony is an annual spring tradition. Cancelling it for the year was not a viable option, so it was postponed until this week and presented virtually by Paul P. Hinchey, President & CEO of St. Joseph’s/Candler.

Nominated by his co-workers as one who best exemplifies the mission and values of the health system, this year’s recipient is Andrew Williams, Manager of Respiratory Therapy at St. Joseph’s Hospital. 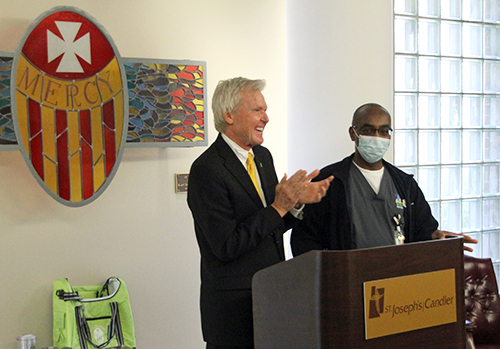 “What some people call heroic, Andrew calls just another day at the office,” Mr. Hinchey said of Williams, who has served the health system for 38 years. “He is a man of God, a superb clinician, husband, and father—he checks off every box on the list. Andrew has had such an impact here as a co-worker.”

As the 2020 McAuley Award winner, Williams’ name and image will appear on the bronze McAuley plaque displayed in the lobbies of St. Joseph’s Hospital and Candler Hospital. He will receive a $3,000 honorarium, a one-year parking pass in the location of his choice, a one-month cafeteria meal pass, a gift certificate for a 60-minute massage at our Center for WellBeing, a St. Joseph’s/Candler watch and the McAuley plaque and pin.

This year, 74 St. Joseph’s/Candler co-workers from 48 different departments were nominated by their peers for the distinguished honor. Nominations are based upon an individual’s ability to illuminate the health system values of compassion, quality, integrity, courtesy, accountability and teamwork.

Andrew Williams has been married to Patricia for 35 years. They have two children. Along with his role as the Manager of Respiratory Therapy at St. Joseph’s Hospital, Williams also serves as a pastor at Genesis New Life Apostolic Faith Church, Inc. He has also volunteered with Savannah’s juvenile court system for the past 22 years.

Williams is known to stay late after hours or transport patients himself so that his staff can make it home to their families on time. One remarkable story from earlier in his career is when Williams refused to give up on a newborn that was not breathing. His knowledge and persistence got that baby to breathe, saving her life. That baby grew up and came to work at St. Joseph’s/Candler and was even supervised by Williams, the man who saved her nearly 25 years earlier.

What His Co-Workers Said About Him:

“He always makes time for his staff and patients, even if it means going out of his way.”

“He is extremely dedicated and has a very high expectation of his staff in caring for our patients.”

“Andrew represents what makes our health system so special; a long commitment to his job, to his supervisors, to educating the next generation of caregivers, and to a tender mercy in the care of the sick.”