Vaccinations against COVID-19 began today at Candler Hospital after an allotment of 300 doses was released by the Georgia Department of Public Health. 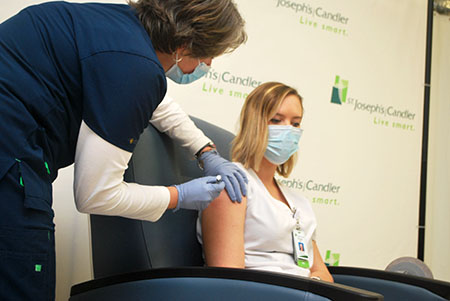 St. Joseph’s/Candler was the first health system in the state of Georgia to begin mass vaccinations of healthcare workers. The first group of co-workers included ICU nurses, COVID unit nurses, physicians, emergency nurses and others who have been treating COVID patients all year.

“It was exhilarating to get the vaccine,” said Kim Raymond, an RN in the Intensive Care Unit at Candler Hospital, who received the vaccine Tuesday. “It is finally here. It’s my hope that the vaccine will alleviate a lot of the stress that health care workers have been feeling for the last nine months and give our patients an even higher level of protection when they come to get care.”

St. Joseph’s/Candler requested enough doses to vaccinate 10,000 co-workers, doctors, emergency responders and other critical workers like fire and police, as outlined in Phase 1A and 1B of the Georgia Department of Public Health’s vaccination dissemination plan. The first official shipment is expected to arrive later this week.

St. Joseph’s/Candler has been working on a plan to vaccinate our 4,200 co-workers and 600 physicians since September. 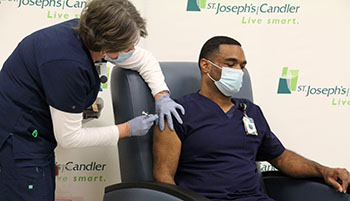 “We didn’t want to wait a minute longer than necessary to begin vaccination of our co-workers, who have tirelessly and innovatively fought this disease for the past nine months,” said Paul P. Hinchey, President & CEO of St. Joseph’s/Candler. “We’d like to thank the Georgia Department of Public Health for releasing these doses to us early. Healthcare workers are at the front line and can demonstrate to the rest of the community better than anyone, that the vaccine is safe and critical to the recovery of our community, our state and our nation.  We believe the clinical trials were rigorous and everybody should get the vaccine so we can put this pandemic behind us and end the personal and economic suffering so many people have had to endure.”