The SmartWomen Luncheon & Expo once again raised a record amount of money - $201,345 - through event proceeds and donations, all for the benefit of uninsured or underinsured women who need lifesaving mammograms and other breast health services.

Traditionally held in October, SmartWomen is an annual fundraiser for St. Joseph’s/Candler’s Telfair Mammography Fund, which provides mammograms and other breast care services for those who cannot afford those life-saving services.

“We know that many women and families are experiencing some economic difficulties, and it’s even harder if they don’t have insurance. The SmartWomen Luncheon & Expo exists to ensure that whatever is happening in the world, women who need breast health services can get them through the Telfair Mammography Fund,” said St. Joseph’s/Candler President & CEO Paul P. Hinchey. “We do not want women skipping their mammograms because they don’t have insurance or they can’t afford their co-pay. I want to thank the entire community for coming together and helping us raise these funds.” 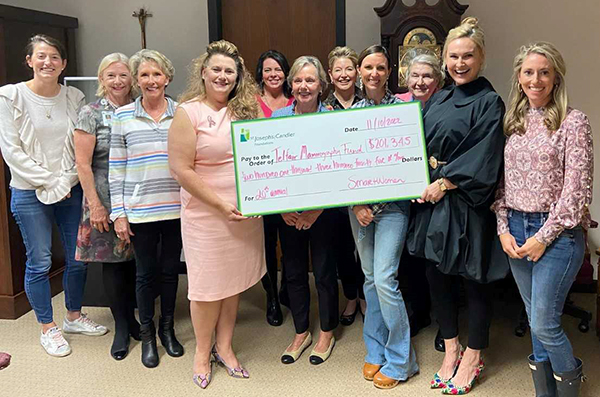 Emmy Award-winning journalist, anchor and producer Soledad O’Brien was the speaker this year. A champion of diversity, she gives voice to the underserved and disenfranchised through her Emmy award-winning reporting.

“Soledad O’Brien was such an inspiring and entertaining speaker, perfect for an event like SmartWomen,” said Gini Nichols, Chairwoman of SmartWomen. “But even more inspiring were the people who attended, the volunteers and the sponsors who helped us make it so successful. They truly helped give a lot of women access to mammograms regardless of their ability to pay.”

In our region, approximately 20 percent of the population is uninsured or underinsured. The goal of the Telfair Mammography Fund is to ensure that all women have access to mammography and other breast health services, even if they have no insurance or high deductibles or copays. The SmartWomen Luncheon & Expo has raised hundreds of thousands of dollars for the Telfair Mammography Fund to meet this goal since its inception.

This year, SmartWomen honored a founding member of the event. Mrs. Kathy Levitt was recognized as the recipient of the first Telfair Legacy Award. Mrs. Levitt has helped organize every SmartWomen event for the last 20 years, which evolved from her original inspiration, Women Helping Women. Her dedication, enthusiasm and persistence have driven the event forward each year so that thousands of women could get help. Mrs. Levitt shares the same vision and generosity as Mary Telfair, for whom the Mary Telfair Women’s Hospital at St. Joseph’s/Candler and the Telfair Mammography Fund is named. She sees past the present and strives toward a healthier and more promising future.