The human parvovirus B19 causes fifth disease, an illness most commonly found in preschoolers and other children around that age. The disease got its name years ago when physicians created a list of classifications of skin rash diseases in children, and placed this one fifth. The unmistakably bright rash may cause concern in parents, but this disease, which is spread by contact with respiratory secretions, is typically a mild one. Take our quiz to learn more:


1. The first sign that a child has fifth disease is usually bright red cheeks, which make the child look as if he or she has been recently slapped on both sides of the face.


2. All of the following can be symptoms of fifth disease EXCEPT:


3. About a day after the rash first appears, it will spread to the arms and legs. The rash will often take on a ____ appearance.


4. Fifth disease is a generally benign viral infection that does not cause significant harm, except for women who are:

A. Elderly
B. Around many children every day as part of their work
C. Pregnant
D. Managing high blood pressure


5. All instances of fifth disease require a visit to the pediatrician. 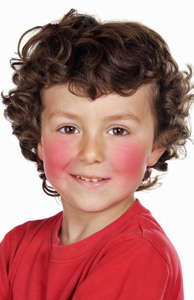 1. A. True. The rash caused by fifth disease is very distinct.

2. E. Nausea. One of the correct symptoms listed above, temporary anemia, is only a concern if the child has another form of anemia and a problem with his or her immune system.

3. D. Lacy. This is because the blotches of the rash begin to fade from the center outwards.

4. C. Pregnant. Though it is not a common occurrence, fifth disease can potentially harm a woman’s unborn baby. Pregnant women who think they may have come in contact with a carrier of fifth disease should talk with their doctor.

5. B. False. Other than acetaminophen if fever or joint discomfort is present, no treatment is usually required for fifth disease in children.