A Fraction Of The Time

For weeks, it drags on…and side effects can make it seem even longer.

For breast cancer patients, radiation therapy can mean 5 or more weeks of juggling treatment with the already calendar-busting business of daily life—family, home, and work. But for some patients, the time can be made shorter through hypofractionation. 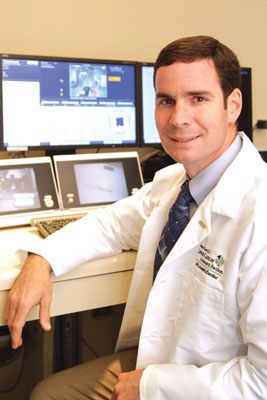 “With this treatment, a patient receives a higher daily dose than with standard fractionation,” explains radiation oncologist Josh McKenzie, MD. “Therefore, the patient’s number of treatments is lower and it saves them time. For example, if standard fractionation for a patient was 25 fractions over 5 weeks, hypofractionation could deliver an equivalent dose in 16 fractions in about 3 weeks. This savings in time also translates to savings in cost.”

Dr. McKenzie says the benefits don’t end with convenience, though. The higher doses have shown to be better tolerated by breast cancer patients.

“Typically, there are fewer instances of side effects from hypofractionation during treatment, yet the treatment has been shown to be equally effective,” he says.

For many physicians, lack of data regarding the risk of long-term side effects from higher radiation doses caused hesitancy towards hypofractionation in the past.  But recent studies have alleviated those concerns.

Dr. McKenzie notes that radiation oncologists in the United States who have recently completed their training have done so in this new “era of hypofractionation.”  He is among the physicians who are comfortable providing this treatment to the vast majority of his patients.

However, the current criteria and protocol followed for hypofractionation can limit the number of patients who have this method as an option.

“Ideal candidates for hypofractionation are older women who have early stage breast cancer—that does not involve the lymph nodes—and who have not had chemotherapy,” McKenzie says.

Of course, the regime of radiation therapy is unique to each patient depending on the characteristics of their disease.

“If I feel comfortable treating a patient who doesn’t fit the protocol exactly, I will let her know that it is an option,” says McKenzie, who practices at the Nancy N. and J.C. Lewis Cancer & Research Pavilion (LCRP). Dr. McKenzie sees patients in both the Radiation Oncology Center at the LCRP in Savannah and the LCRP’s Hilton Head/Bluffton Radiation Oncology Center.

The feedback that Dr. McKenzie’s received from past patients has been wholly positive.

“I have not had a single patient who has regretted this treatment,” McKenzie says. “They were all very thankful.”

The Basics On Fractions In Radiation

Radiation therapy can force cancer cells to stop growing or die. With external beam radiation, the radiation machine sends beams to the tumor and some of its surrounding areas. The procedure is similar to receiving an X-ray and is painless.

Each radiation treatment is called a fraction because the machine is delivering a fraction of the total radiation dose.

The unit of measurement for the absorbed dose of radiation to a patient is called the gray (Gy).

“If the patient requires a total dose of 60 Gy and we treated with 2 Gy per fraction, that patient will need 30 treatments,” explains radiation oncologist Josh McKenzie, MD.

“However, if we give that patient, for example, 2.5 Gy per fraction, we can give her the same total dose in a shorter period of time,” McKenzie says. “This is known as hypofractionation.”