Former Chicago Bear Adrian Peterson is one of approximately 3 million people in the United States who has dealt with stuttering his whole life. Though he was determined not to let it affect his success in school and later, his career, there were times when Peterson felt discouraged with speech therapy.

“It wasn’t something I wanted to do,” Peterson says. “You don’t necessarily want to work on things that you’re not good at.”

The struggle with staying engaged in therapy is a common one, according to Janet Everly, a speech therapist at St. Joseph’s/Candler.

“It’s not easy to change your speech patterns,” Everly says. “Each person is different, but most patients tend to have ups and downs during their therapy. There is a lot of rehearsing and practicing.”

Before Everly develops a long-term plan for a young patient, she first identifies whether or not the stutter is part of a normal developmental stage. 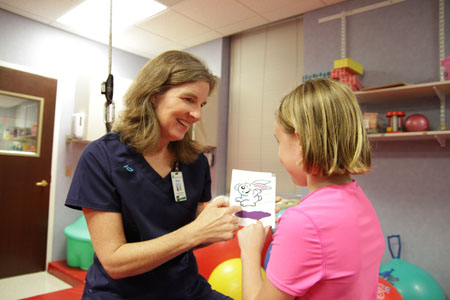 “Children between two and four years of age are still catching up with their own language, and they may struggle to get words out, “she says. “This usually passes after five or six months.”

For those who continue to stutter as they get older, it means moving the goalposts. Speech therapists like Everly can teach patients how to deal with the stuttering and make it less impactful on their communication.

Everly employs a series of breathing, word and phrasing exercises for each patient. Once learned, these tools can help people who stutter to prepare for certain situations.

“We’ll start in a quiet, one-on-one setting,” Everly says. “Eventually we’ll work up to more challenging situations, such as ordering something at a counter and later on, giving a book report or a presentation.”

The exact cause of stuttering is unknown, and there is no medication to treat it. For those who have stuttered most of their life, it typically does not go away.

“You will likely have to manage your speech for the rest of your life, but speech therapy can help give you the tools to do that successfully, and we can work together to determine your personal goals,” Everly says.

Family and friends can help by simply giving someone who stutters a little extra time.

“If you can wait and not try to fill in the words for them, it lets them know they have the time to get their words out,” Everly says. “Knowing that you’re comfortable helps them tremendously.”

She appreciates how people like Adrian Peterson are willing to speak about their own experiences with stuttering and speech therapy.

“Here is someone who says to kids, ‘Yes, I’ve had difficulty getting my words out,’” she says. “’But look at all the things I can do.’”