Ready For The Test

For dizziness sufferers, specialized testing is the first step in solving the problem

When her husband Thomas Baughmann was struggling with bouts of dizziness and had even fallen a few times, LaVon Freeman was relieved to learn that a simple oto-neurological test might yield a diagnosis. That is, until she talked to a friend who’d had the same test, called a Videonystagmography, or VNG. The friend told the couple that the VNG was pretty uncomfortable.

Clinical audiologist Shea Stromberg, AuD., CCC-A/FAAA, of St. Joseph’s/Candler’s Center for Oto-Neurology, has heard those concerns many times. But she also knows how invaluable the VNG is for patients with dizziness.

“The VNG tests parts of the inner ear balance system called the vestibular system,” Stromberg explains. “The test is performed with goggles with cameras or electrodes placed around the eyes in order to record eye movements.  There are three parts: first, the patient watches a small moving target on a screen or light bar which tests how the eyes and vestibular system communicate with the balance centers in the brain.  Second, the patient is placed in a few positions to try to provoke dizziness.  Finally, cool and warm water or air is flushed into the ears for a few seconds in order to turn on the balance systems separately and measure if the systems respond equally. This part can cause the patient to feel dizzy for a couple of minutes.” 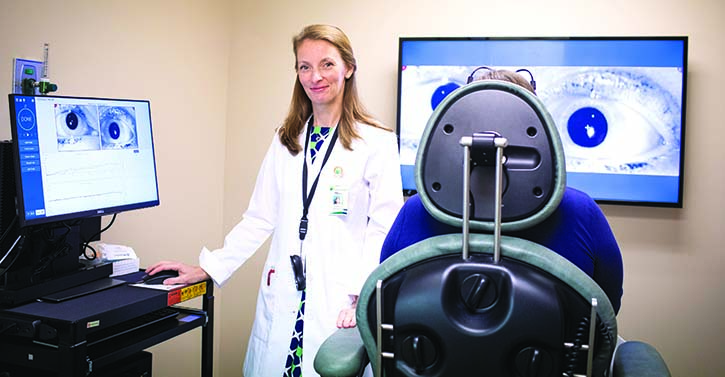 With her husband’s dizziness become more and more debilitating, Freeman knew they had to make use of their referral as soon as possible. As her husband underwent the test, Freeman could only wait and hope for the best.

When he finally came out, he said, “That was a breeze!”

“Our friend said it was painful,” Freeman says, but she was grateful that her husband went through with it anyway. Not only did he not experience pain or nausea, but it helped determine how Baughmann could overcome his dizziness.

“In addition to finding a balance system weakness on one side, the test demonstrated that Mr. Baughmann also had benign paroxysmal positional vertigo, or BPPV,” Stromberg says.

BPPV affects the balance system in each ear, which consists of three semicircular canals and two organs called the utricle and saccule.  The canals, which are connected to the utricle, tell the brain if the head is turning, nodding or tilting, while the utricle tells the brain if the head is moving forward or backward. The utricle contains small calcium crystals, which can become dislodged and fall into one of the balance canals.  When a patient changes head or body positions, those crystals will move and cause a spinning sensation, or vertigo.

The treatment is typically simple—patients are placed in a series of positions which move the floating crystals through the canal and back into the utricle.  The patient also may be instructed to avoid certain positions for a couple of days.  In most cases, BPPV can be treated in just one or two visits.

“We were so happy,” Freeman says. “We had an excellent experience, and most importantly, we found out what was wrong and what to do about it.”

Learn more about other helpful diagnostic tests are available at the Center for Oto-Neurology.