Meet Bob and Ted. Both need surgery. Bob has a cancerous tumor in his colon and needs it removed before he can start chemotherapy. Ted gets acid reflux after he eats, which hasn’t improved with medication.

Which of them should be in line for the most advanced mode of robotic surgery?

The answer: both Bob and Ted.

As long as they are candidates for a minimally-invasive procedure, patients can benefit greatly from the latest robotic technology such as the da Vinci Xi Surgical System. 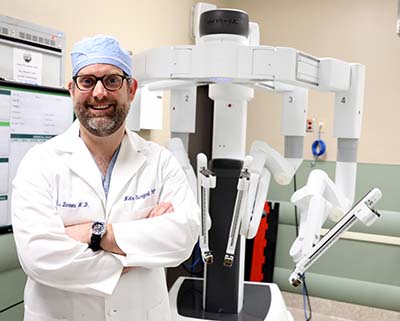 “If you need surgery for your acid reflux, it is not a matter of severity determining your best option,” explains general surgeon T. Ellis Barnes IV, MD, of Metro Surgical. “It is binary—you either need surgery or you don’t. If you do, your options are open surgery, laparoscopic or robotic. The repair will be generally the same with laparoscopic or robotic, but I believe robotic has advantages for both the surgeon and the patient.”

Open surgery is the kind we all know, even if it’s only from TV—the doctor makes a large incision in the body and goes in with a scalpel. The development of laparoscopic surgery was a significant advancement for certain procedures, which could now be called minimally-invasive. In laparoscopic surgery, surgical instruments and a camera are inserted into the abdomen through very small incisions. The surgeon dissects and makes repairs from outside the body, using a monitor to see the patient’s organs. With smaller incisions, there is a lower risk of infection, less blood loss and a quicker recovery for the patient.

Robotic surgery is the most recent advancement, and newer developments in robotic technology continue to be unveiled as surgery moves into the future.  St. Joseph’s/Candler has been the region’s leader in robotic technology, being the first to install the da Vinci Si Surgical System more than a decade ago, and more recently having added the da Vinci Xi, the fourth generation of the technology.

The Technology Is Instrumental

“Robotic surgery gives me articulated wristed instruments,” Dr. Barnes says. “The articulation allows for more of everything I need as a surgeon. More flexibility. More finesse. The dissection, resection and reconstruction are all more precise.”

The da Vinci Xi Surgical System is made up of two separate entities. Its surgical cart can be placed at any position around the patient, allowing for multi-quadrant access, with four arms overhead that offer an incredible range of motion, facilitating access from almost any position. Meanwhile, the surgeon sits at a console a few feet away from the patient. Placing their hands in glove-like controllers called masters, surgeons use the robot’s high definition camera to manipulate their movements. The imagery gives them the magnified views of laparoscopic surgery while also providing the three-dimensional view of open surgery. The onboard computer replicates the surgeon’s movements precisely and to scale, and even filters out the surgeon’s pulse. 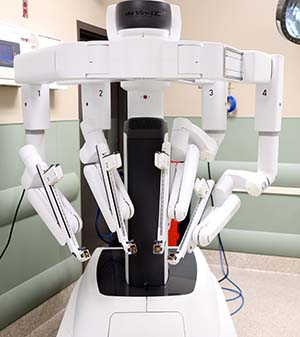 “The robot is the system of instruments and I control the instruments,” Dr. Barnes explains. “I’m a perfectionist, so the degree of articulation afforded to me by the wristed instrument is phenomenal. The visualization is amazing, and it’s all 3D.”

Dr. Barnes also prefers how the robot’s haptics—how well the robot simulates the sense of touch for the surgeon—gives him more control.

“One of the basic surgical principles is to have as little tissue damage as possible,” Dr. Barnes says. “The da Vinci’s instruments allow for the softer grasping of tissues.”

The Difference For You

As cool as the tech is, most patients want to know if the benefits to the surgeon will have a positive effect on their outcome. The answer is yes, and for several reasons. Along with less tissue damage that Dr. Barnes noted, candidates for robotic surgery also typically experience:

“I do a lot of reflux surgery and about two-thirds of my colorectal cases on the da Vinci,” he says. “I do hernia repair, paraesophageal repair. Basically, I do a lot of robotic surgery! I think it’s making everything better—for the surgeon and the patient.”