Apnea is the temporary suspension of breathing in which the inhalation muscles don’t move and the lungs intake no air. No one stops breathing on purpose, but what if you are asleep and don’t know that it’s happening? This is called sleep apnea.

“The most common form of sleep apnea is known as obstructive sleep apnea,” explains Harold Oglesby, Manager of the Center for Pulmonary Health and Sleep Disorders Medicine at St. Joseph’s/Candler. “When throat muscles relax intermittently during sleep, they fail to keep the airway open.”

More than 18 million people in the United States suffer from obstructive sleep apnea, according to the National Sleep Foundation.

“People don’t realize how many aspects of your life are affected by sleep apnea,” says Pamela Rockett RRT, RPSGT, a polysomnographic technologist and team leader in the Sleep Disorder Center. “The symptoms aren’t just experienced at night. The most obvious symptom is daytime fatigue, which if severe enough could lead to the person falling asleep while working or even driving.”

Other symptoms for obstructive sleep apnea include:

Loved ones of those with sleep apnea may see the signs that the sleeping person obviously can’t. This includes silent pauses in breathing or loud, frequent snoring. 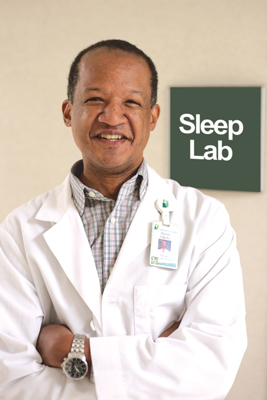 A proper diagnosis of sleep apnea is often achieved through testing at a sleep lab such as the one in the Sleep Disorder Center. During an overnight stay in the center, a patient is monitored while they sleep. Airflow, muscle activity, blood oxygen levels, heart rate, and other functions are recorded and evaluated by a physician. In some cases, patients can take a sleep test at home to determine if more lab study or treatment is needed.

“Sleep apnea can be a very serious disorder because so much of our daily, healthy functioning is tied to good sleep,” Oglesby says.

Are You At Risk?

Several factors can increase your risk of developing obstructive sleep apnea. These include: