Radiation therapy can be an effective part of colorectal cancer treatment, depending on the site and type of tumor

Colorectal cancer can start in either of two places—the colon or the rectum. The cancer can also be referred to as either colon or rectal cancer, depending on that starting point. These cancers are grouped together because of their similarities, but the treatment plan can be different. For example, radiation therapy is commonly used for rectal cancer, but not for colon.

“It’s more difficult for surgeons to get widely around a tumor in the rectum as opposed to the colon,” explains radiation oncologist Joshua T. McKenzie, MD.  “The rectum is located within the pelvis, which is sort of funnel-shaped, and within the narrow neck of that funnel. Colon cancer, on the other hand, typically occurs higher up in the abdomen and you don’t have to deal with nearby structures such as the bladder or pelvic sidewall, for example.” 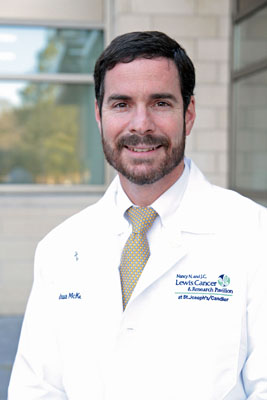 Radiation therapy sends beams of high-energy waves or particles (such as X-rays) to a specific part of the body, damaging or destroying cancer cells and shrinking tumors. It is often used in conjunction with chemotherapy or surgery in the treatment of several types of cancer.

Fighting Cancer And Its Recurrence

Radiation therapy often serves two purposes in the treatment of rectal cancer. Along with being done before surgery (known as neoadjuvant therapy) to make it easier to remove, radiation can also be given to reduce the risk of the cancer returning.

“If a patient has a tumor of a certain size, or if their lymph nodes are affected, there is an increased risk of recurrence, even if the surgeon is able to remove the tumor more easily,” Dr. McKenzie says.

Adjuvant therapy, done after surgery, helps keep cancer from returning and may involve both radiation and chemotherapy. Reducing the rate of recurrence is important with rectal cancer because it is even more difficult to treat a second time.

“Pelvic recurrence causes bowel and bladder dysfunction and severe pain,” Dr. McKenzie says. “In addition, it is almost never possible to go back and operate again.”

Another type of cancer in which radiation therapy can reduce the risk of recurrence while protecting nearby structures is cancer of the esophagus, which is located in the middle of the chest near the heart, lungs, and spine.  Dr. McKenzie also treats patients with head and neck cancers post-operatively to reduce the risk of cancer recurrence in that region.

“The most effective treatment plan is determined by the body site, stage, and specific type of cancer,” Dr. McKenzie says.

Most patients receiving radiation therapy will receive treatments five days a week for several weeks. The process is painless and similar to getting an X-ray—patients are positioned on a treatment table and are asked to be still while the radiation beams are delivered. Each daily session usually lasts between 10-15 minutes. 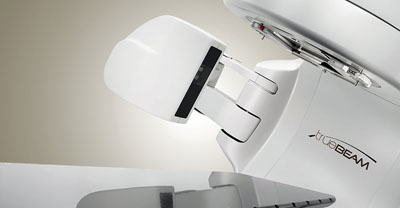 “Patients with rectal cancer are sometimes treated in the prone position to help reduce the exposure of the bladder and small intestines to higher doses of radiation,” Dr. McKenzie says. “We shape the beams to conform to the shape of the tumor to help protect patients from side effects or damage to healthy cells.”

Colonoscopy: A Piece Of Cake?

One of Dr. McKenzie’s radiation therapy patients was Dennis Baxter, who after being diagnosed with rectal cancer in July 2017 is now a cancer survivor. Like many others, Baxter had heard the “horror stories” about getting a colonoscopy and avoided one himself. Today he is a vocal advocate about getting screened.

“The peace and assurance you can walk away from after a colonoscopy is certainly worth the effort you have to put in and the little bit of aggravation you might go through in getting ready for it,” Baxter says.

When Baxter first discussed the problems he was having going to the bathroom with his doctor, he underwent a CT scan that showed nothing. But the uncertainty that Baxter felt about what might be wrong was strong enough that he reached out to Steven Carpenter, MD, a gastroenterologist with The Center for Digestive and Liver Health, to receive his colonoscopy months earlier than originally scheduled. The screening revealed the tumor in his rectum. 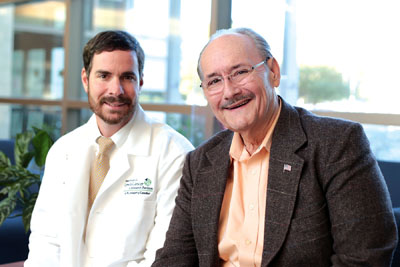 That’s when Baxter began radiation and chemotherapy at the Nancy N. and J.C. Lewis Cancer & Research Pavilion, followed by robotic surgery performed by Mark Blankenship, MD, of Metro Surgical, PC. More weeks of chemotherapy followed, along with the use of an ileostomy bag (the ileostomy was later successfully reversed by Dr. Blankenship as well), and just over a year after his diagnosis, it was time for another colonoscopy.

“It wasn’t a piece of cake, but it was pretty close to it,” Baxter says. “It’s really not that bad. And the comfort and assurance in knowing that everything is fine is well worth it by far.”