Going With The Flow

When most people think of reflux, they think of stomach acid flowing back up into the esophagus, causing heartburn—a very common condition. But reflux is defined as any flow of fluid that goes in the wrong direction, and that can include your blood. When a damaged valve in your veins allows blood to flow backward, it causes another common condition—varicose veins. 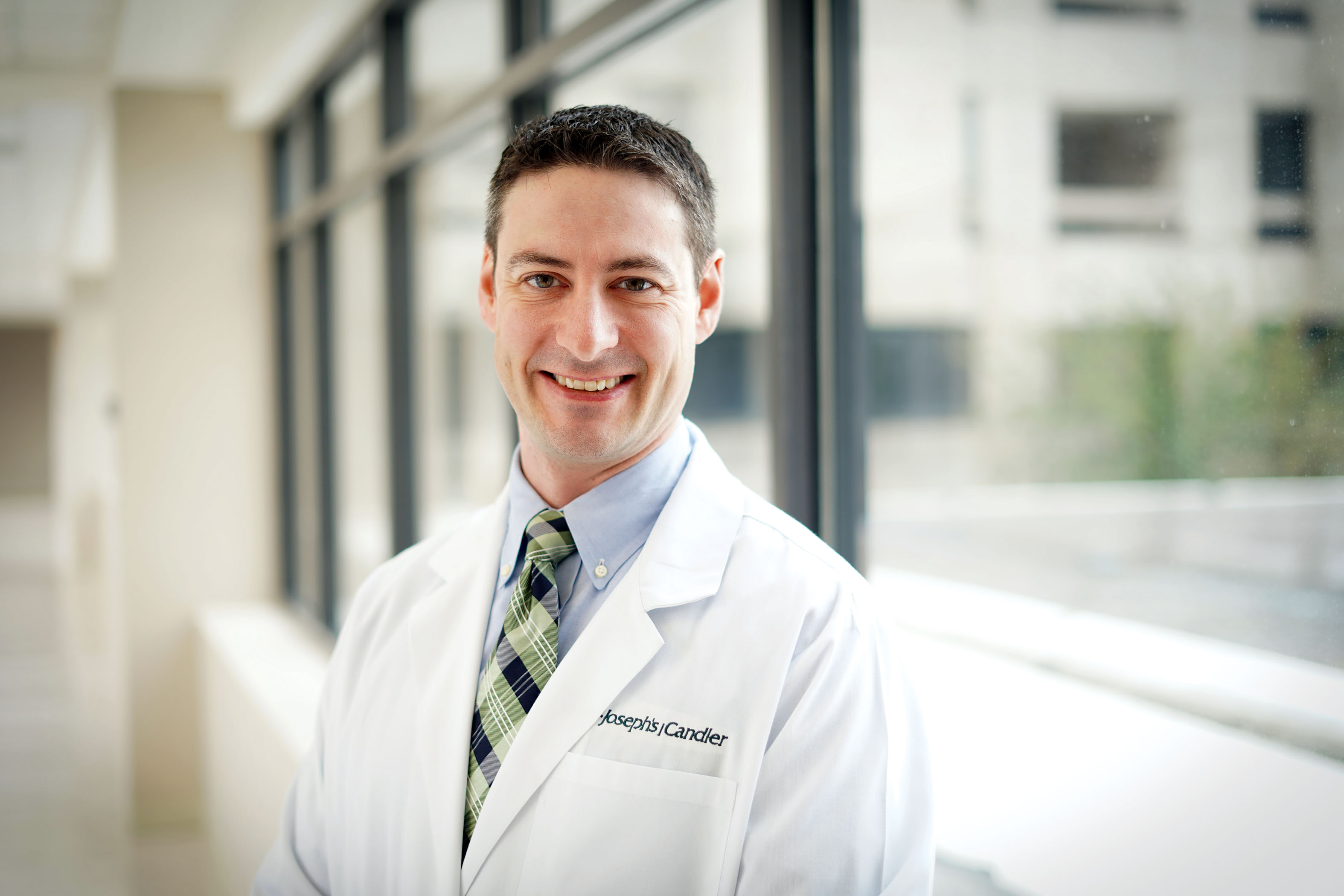 Blue and bulging, often in a twisted shape along the leg, varicose veins are often a cosmetic nuisance.

“Varicose veins can occur in men or women of any age,” explains Peter Hunt, MD, RPVI, of St. Joseph’s/Candler’s Physician Network – Vascular Surgery. “But they most frequently affect older women. Being overweight or having a family history of varicose veins can also be a factor.”

Though not an urgent problem, having varicose veins can mean that the one-way valves in your main veins are no longer working correctly. This is a condition known as venous insufficiency, which causes increased downward pressure in the veins.  If you have symptoms but don’t seek treatment, it could get worse.

Compression stockings are a first line treatment, but not a cure, and have to be worn indefinitely. There are also options for those who want a more permanent solution.

The established treatments of varicose veins for certain patients include radiofrequency ablation (RFA) and surgery. With RFA, a thin catheter is inserted into the vein, then numbing medicine is injected along the length of the vein. Once in position, the catheter is drawn backward as it sends out heat created from radiofrequency. This closes the vein off from blood flow.

The treatment for more complicated cases is surgical intervention, which may leave tiny scars on your legs.

But for some patients, there is a new treatment option called VenaSeal. This device, developed by Medtronic, also closes off damaged veins and diverts blood flow to healthy ones. But instead of radiofrequency heat, the VenaSeal uses an advanced medical adhesive to close the vein.

“We’re excited to bring this option to this area because of its advantages,” Dr. Hunt says. “Two of the most significant are less pain and a quicker recovery.” 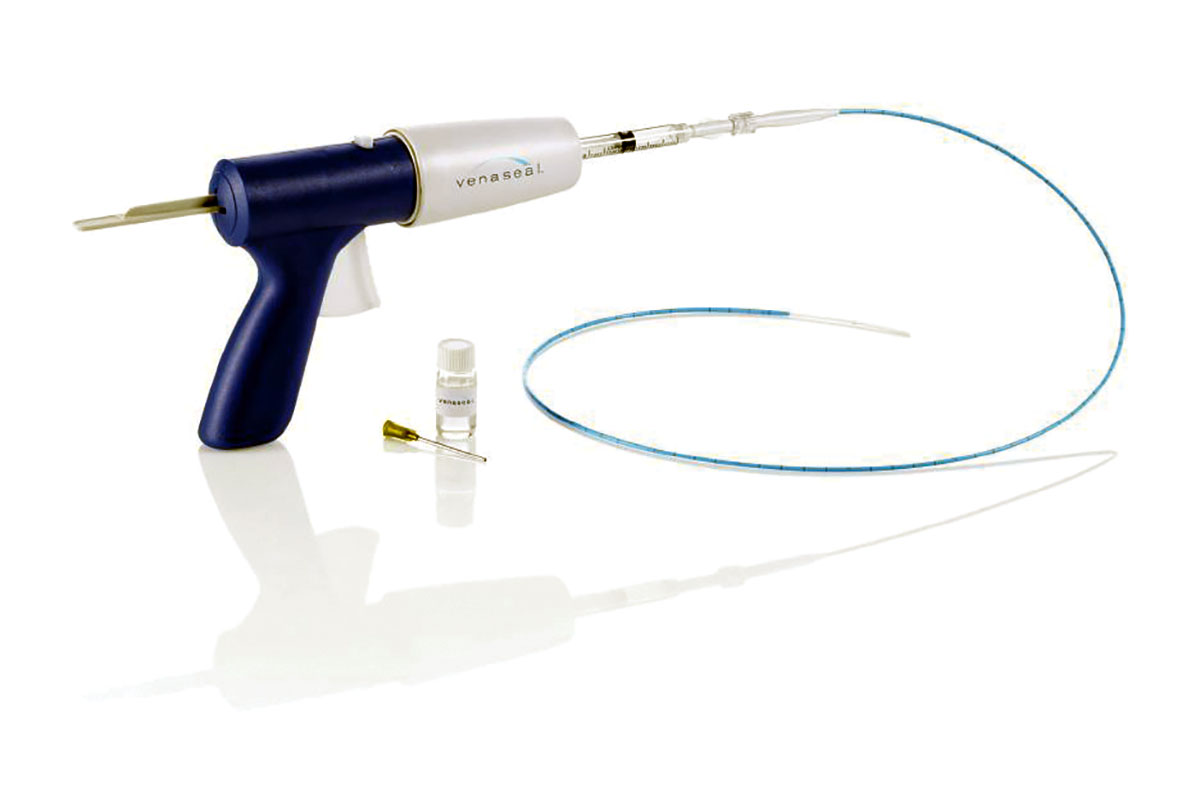 Patients can often return to their normal activities right after the procedure, with only a small bandage to cover the incision.

“RFA requires numbing medicine along the leg, which involves multiple skin injections, and some patients need a sedative during the procedure for that reason,” Dr. Hunt says. “VenaSeal only requires one injection of numbing medicine at the insertion site. There is less bruising as well.”

Patients may feel a mild tugging sensation during the procedure, but overall there is less pain during and after the VenaSeal procedure than with other treatment options, along with a reduced risk of nerve damage.

“There is no trauma to the vein with this procedure,” Dr. Hunt says. “I can perform this right in the office in about 45 to 60 minutes. We do ask people not to do heavy lifting or strenuous activity for two weeks after the procedure, but light activity is perfectly fine.”

Getting A Leg Up

Most patients won’t have to bother with compression stockings after the VenaSeal procedure or RFA, although you should talk with your doctor to decide what benefits you most. Dr. Hunt follows up with his patients after two weeks and then again after three months to confirm that the varicose veins are decreasing in size or have gone away.

By that time, patients usually report that they have a renewed confidence in enjoying activities they may have avoided in the past, such as going to the beach or playing tennis with friends. Not only is the heaviness or pain gone, but now they like how their legs look.

Not all patients are candidates for VenaSeal, including those who may have an allergic reaction to adhesives or those with autoimmune skin disorders. But those patients still could qualify for RFA.

“The success rate for the VenaSeal procedure and the RFA procedure are the same at three years out,” Dr. Hunt says. “Patients who come to us will have different options, but for most people who suffer from varicose veins, the VenaSeal option is the future.”

Dr. Peter Hunt has office hours in Savannah, Hinesville, and Statesboro as well as Bluffton, SC. Patients may need a referral. Call 912-354-8331 to learn more.