It was a meeting like so many before it—a group of physicians on a multi-disciplinary team that diagnoses and treats thoracic, or lung, cancer. The patient being discussed had a lung nodule—a tiny growth that could be either malignant or benign—but it was right up against her heart. This made a needle biopsy through the chest too dangerous. 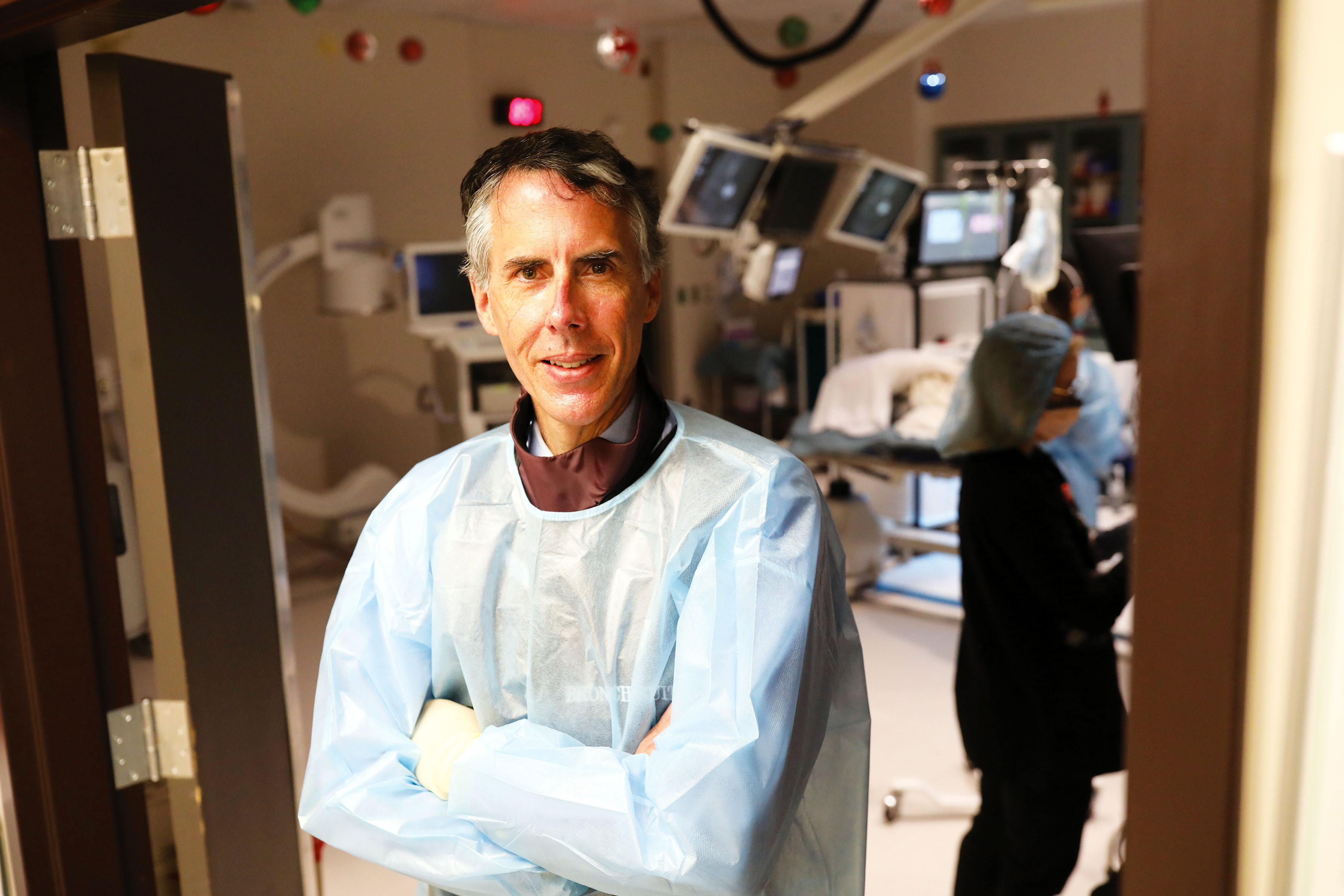 In the past, the next question for the team would be whether to wait to get another scan in three to six months or to treat the nodule without confirming whether or not it is malignant. But this time, pulmonologist M. Douglas Mullins, MD, had a new suggestion.

The robot Dr. Mullins was talking about is the Monarch Platform, created by Auris Health, in Candler Hospital’s Bronchoscopy Suite. The Monarch technology integrates robotics and advanced visualization with endoscopy, the use of small cameras and tools through a scope that can enter the body. Specifically, Dr. Mullins performs a bronchoscopy, in which the bronchoscope is put through a patient’s nose or mouth and guided down through the trachea and into the lung’s airways.

“We have a long experience of using frontline technology to navigate to places in the lung,” Dr. Mullins says. “What the Monarch robot does is give us more control. Tremendous control, actually. The Monarch holds that scope exactly where I put it, and it will stay there indefinitely while I complete the biopsy.”

The Monarch also provides Dr. Mullins with computer-assisted navigation based on 3-D models of the patient’s own lung anatomy. He can see in real time if he needs to regroup, go back in and get another sample. He can change his navigation without having to handle the scope at all.

“I control the scope with an interface that is not unlike an Xbox controller,” Dr. Mullins says. “And because of the way the scope is engineered, I’m able to have visualization throughout the entire procedure.” 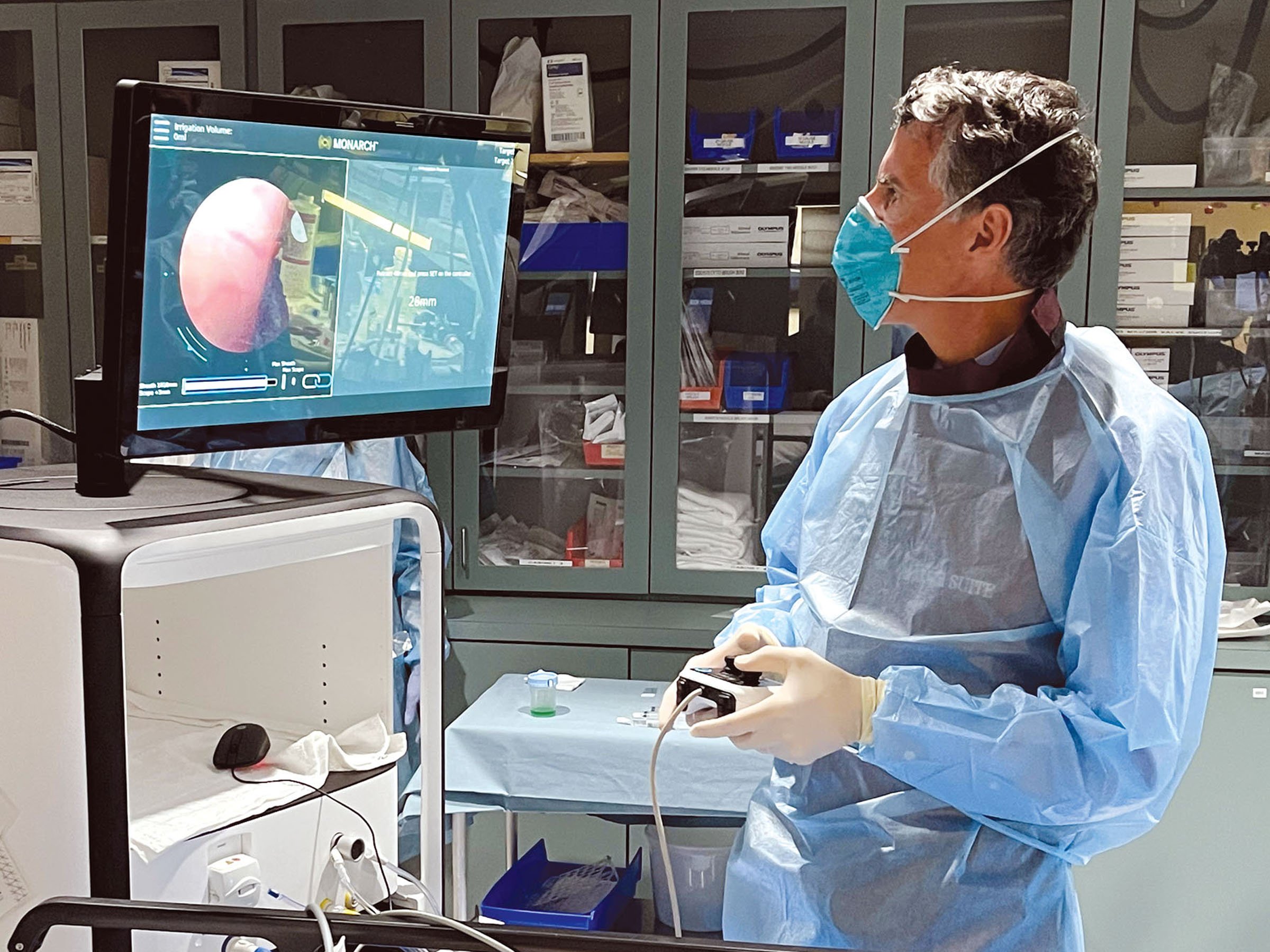 Once the Monarch bronchoscope has gone as far as a traditional one can go, its camera can actually decouple from the sheath and go further.  Biopsy tools can then extend through the camera.

“We had always been confined to the airways,” Dr. Mullins says. “Now we can go all the way out to the pleura, a thin layer of tissue located at the periphery of each lung.”

The enhanced capability for the physician from the Monarch provides great benefits to the patient, including:

An earlier diagnosis also increases the chance for survival. Lung cancer is the leading cause of cancer deaths worldwide, in part because it is often not found until an advanced stage.

“We can get to a problem when it’s smaller than we’ve ever been able to do before,” Dr. Mullins says. “I’ve never been so enthusiastic about a technology getting better like this.”

There are several Clinical Effectiveness Teams at the Nancy N. and J.C. Lewis Cancer & Research Pavilion who meet regularly to review individual cancer cases. Each team is comprised of physicians with related specialties and support personnel.

“We have an established team with deep and wide experience in the region,” Dr. Mullins says. “And we discuss as a team what the best approach is and what the possibilities are in treating a patient. The Monarch Platform brings another element to what that best approach might be in a given case.”

Most commonly, Dr. Mullins is planning treatment with surgeons and radiation oncologists. Once Dr. Mullins confirms the diagnosis with the Monarch, the patient is often treated using the CyberKnife—a robotic system that can aim radiation beams from up to 1200 different angles with pinpoint precision. Chemotherapy is not commonly part of the discussion because the Monarch allows Dr. Mullins to intervene and diagnose earlier. Either way, Dr. Mullins says it is never a “one-man show.”

“I won’t start down a road of a treatment plan if I don’t already have the people who will do the treatment on board,” he says. “Technology like the Monarch is very strong. But even stronger than the robot is our team, which has been working together for a long time.”