Keeping Pace with the Pulse of Life

Pacemakers and defibrillators are different devices, but both help your heart

The heartbeat is a phenomenon that we often take for granted—it keeps you alive, pumping around 2,000 gallons of blood through your body each day, never taking a break and never needing any help from you. However, if the heart beats too quickly or too slowly, it may need help with its electrical pulses.

According to the American Heart Association, these heart rhythm disorders, called arrhythmias, are very common and most cases are not serious. However, some may cause symptoms and could be potentially dangerous. The diagnosis and treatment of arrhythmias falls under the field of medicine known as cardiac electrophysiology. Two important developments in this field over the last half-century are the pacemaker and the implantable cardioverter defibrillator.

The artificial pacemaker is probably the most well-known device for treating arrythmias. The device is surgically implanted, typically in the left shoulder, and wiring is placed through the patient’s veins into the heart. 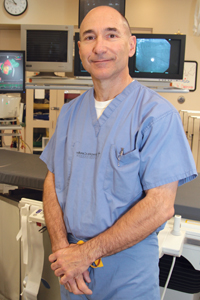 “A pacemaker delivers an electrical signal that can keep the heart beat from slowing down too much or from speeding up too fast,” explains electrophysiologist Michael B. Chisner, MD. Many, but not all, patients who require a pacemaker have experienced symptoms of their arrythmias such as dizziness or lightheadedness, shortness of breath, pounding heartbeat, fainting or near-fainting, and in some cases cardiac arrest.

Certain patients may be candidates for a biventricular pacemaker, a device used in what is known as cardiac resynchronization therapy. This treatment helps patients whose lower and upper heart chambers are not pumping in sync.

“In this situation, we’re not really trying to speed up or slow down someone’s heartbeat, we are trying to have it function more efficiently,” Chisner says. “This in turn helps the patient function better and feel better, with an improved quality of life.”

The biventricular pacemaker can function alone or be built into an implantable cardioverter defibrillator, or ICD. Though ICD’s have been in use for decades, patients are often not as familiar with them and sometimes confuse them with pacemakers. The surgery to implant an ICD is similar, but the device serves a different purpose.

“The ICD monitors a patient’s heart and delivers a high-energy shock when it detects an abnormal rhythm,” explains electrophysiologist Arthur C. Kendig, MD. “If the arrhythmia is life-threatening and can cause sudden cardiac arrest, the ICD’s electrical pulse can restore the normal rhythm.” 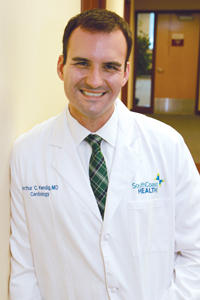 ICD’s are also implanted in some patients with congestive heart failure, which means the heart is pumping much weaker than normal, putting the patient at risk for sudden cardiac arrest. Patients who have already suffered a heart attack and are at risk for another episode of cardiac arrest are candidates for ICD’s as well.

Pacemakers can be built into ICD’s but not vice versa. Another difference for patients is that while a pacemaker will help a patient feel better, the ICD alone is designed for monitoring and won’t have that effect.

“The ICD is like an airbag in a car,” Kendig says. “You don’t want to ever have to use it, but you’re glad it’s there.”

Both Dr. Chisner and Dr. Kendig have begun offering subcutaneous implantable cardioverter-defibrillators, or S-ICD’s, to patients who are good candidates for this new type.

“With S-ICD, the wiring is still underneath the skin but stays outside of the heart and veins,” Kendig says. “This eliminates some of the risks associated with a traditional ICD, such as infections or the build up of scar tissue in the veins.”

“The S-ICD can’t pace your heart, so it does have some limitations in that regard,” says Chisner. “It may also cause a little more discomfort for the patient during the healing process. However, it is a good step forward and I think the use of S-ICD’s will accelerate in the future.”

Though they serve different purposes, pacemakers, ICD’s, and their variations have improved both survival rates and daily life for those with abnormal hearth rhythms—a fact that brings both Dr. Chisner and Dr. Kendig great satisfaction.

Learn more about the Electrophysiology (EP) Lab at The Heart Hospital here.