Healthy To The Core

The body’s core is as important as it sounds, and is more than your abs

Picture that moment when you tighten your grip and pull up the weight—not only are your arm muscles engaged, but you feel your back and stomach muscles working hard, too, even straining a bit.

And your first frustrated thought is, “Who put the milk so far back in the fridge?”

No, you don’t need to be a weightlifter to understand the importance of the core muscles. Day-to-day tasks such as picking up groceries, doing housework, and even just maintaining good posture are dependent on this group of muscles, which—contrary to popular belief—go beyond the belly’s six-pack. 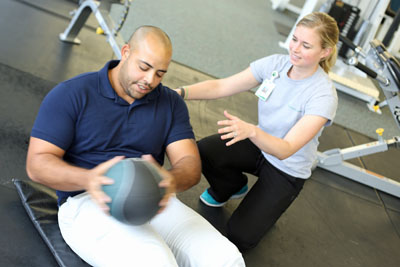 “People tend to think your core is just your abs, but it really is your whole midsection,” explains Brittany Hartl, an exercise physiologist at St. Joseph’s/Candler’s Wellness Center.  “The core is made up of our front, back, and side muscles, and there are four different sets of abdominal muscles alone. So one set of exercises, such as straight sit-ups, is not going to work all of your core.”

Hartl tries to emphasize flexibility and functionality to those who attend the Core & More class at the Wellness Center each week.

“We start out with yoga moves to help incorporate balance, then do standing core exercises,” she says. “We also use the stability ball and do some Pilates-style exercises. I teach people in the class to engage their core no matter what they are doing, even if it’s just sitting or standing.”

Engaging the core means properly contracting the core muscles, which encourages stability when performing a task such as weightlifting.

“If a person has a tight back but weak abs, or vice versa, it creates a kind of push-pull situation,” Hartl says. Her class focuses on exercises that strengthen the whole series of muscles that make up the core.

“Plus, people get bored with just doing sit-ups,” she says with a laugh.

Another advantage of the class for Hartl is the chance to introduce new ideas to students with minimal equipment.

“These are moves you can learn and take home with you,” she says, adding that the low-impact nature of the class has made it a good starting point for those recovering from an injury or post-surgery. The exercises can be modified for those who don’t want to get on the floor because of back pain, for instance.

“We keep it fun but at a slower pace, so you can take it easy if you want to,” Hartl says, before adding with a smile, “or you can do it as hard as I do.”