Alzheimer’s disease is a subtype of dementia, but the terms are not interchangeable

As the American population of those 65 or older continues to grow, more and more families will be facing the diagnosis of dementia for their loved ones. Most of those patients—currently more than 5 million in the United States—will be diagnosed with Alzheimer’s disease, according the Alzheimer’s Association. But not all people suffering from dementia have Alzheimer’s disease. The two conditions are related, but not the same. 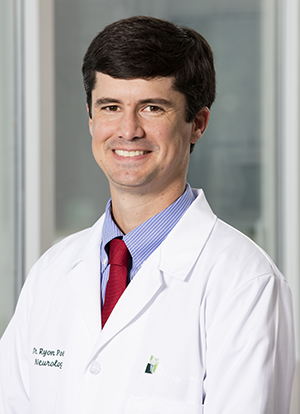 “Dementia is a general term, and there are many different causes of dementia,” explains Ryon Poston, MD, a Board-certified neurologist at St. Joseph’s/Candler’s Physician Network - Neurology.  “People diagnosed with dementia often have issues with memory loss and other impairment to their intellectual abilities. Their thinking and sometimes their behavior is affected, and it’s serious enough to disrupt or interfere with their activities of daily living.”

Cognitive issues developing from dementia can be various and include trouble with language or ability to communicate, difficulty focusing on a task or maintaining attention, or problems with higher executive functioning such as the ability to reason and use good judgment.

“There are several different types of dementia, with the most common being Alzheimer’s disease,” Poston says.

Between sixty to eighty percent of dementia cases are Alzheimer’s disease. The second most common type is vascular dementia.

“Patients with vascular dementia have a history of cerebrovascular disease and may have suffered multiple strokes or could have a condition called microvascular ischemic disease, which is often seen in patients with longstanding hypertension or diabetes,” Poston says.

Dr. Poston has also encountered patients with features of both Alzheimer’s disease and vascular dementia. This is known as mixed dementia.
“A mixed picture from those two types is not uncommon,” Poston says.

Alzheimer’s disease – the most common type of dementia

“The largest number of people we see with dementia have Alzheimer’s disease,” Poston says.  These patients experience memory loss and impaired thinking—indicators of dementia. As Alzheimer’s progresses, the symptoms become more severe and go beyond memory.

“Patients become more disoriented and may be confused about things like what month or year it is,” Poston says.  “In later stages, along with more serious memory loss, patients may even develop suspicions about infidelity or financial dishonesty from their closest loved ones.”

Dr. Poston says that physical symptoms can appear as the disease advances, including difficulty speaking, walking, or swallowing. They can be unaware of their surroundings and vulnerable to infections such as aspiration pneumonia. At the same time, they may be unable to communicate their pain or the worsening of their condition.

“The greatest risk factor for Alzheimer’s disease is increasing age,” Poston says. “There is a small percentage of people that will experience symptoms in their 40s and 50s, but the vast majority of patients will be 65 and older.”

Some patients are aware of their memory loss when they come to see Dr. Poston, but many times they may not either recognize the problem or realize its full extent.

“At times we depend on the spouse or the adult children to give us the most accurate picture of the symptoms,” Poston says. “They will let us know that they’ve had to step in and help with finances or to manage medications for the patient.”

There is no single test for dementia. Dr. Poston will base his diagnosis on the patient’s history of present illness, a physical exam, and lab tests. Patients are also asked to do screening questionnaires which include basic questions and tasks such as simple arithmetic. These questionnaires can be done in the office in a few minutes and can give physicians a quick idea of where the patient is cognitively.

“Complaints about cognitive slowing and memory can sometimes be attributed to treatable and potentially reversible conditions,” Poston says. “For example, untreated or under-treated depression can be behind a phenomenon called pseudo-dementia, where it looks like dementia but it is actually the untreated depression that is causing the poor memory and thinking."

Other treatable factors that may affect thinking and memory include side effects from medication, thyroid disease, and deficiencies of vitamins such as B12.

Managing A Disease With No Cure

For those patients with Alzheimer’s disease, there currently is no cure. However, there are medications that have been shown to lessen symptoms. Drugs known as cholinesterase inhibitors prevent the breakdown of acetylcholine, a chemical in the brain that affects communication among nerve cells. Higher levels of this chemical messenger can help stabilize or delay cognitive symptoms, albeit for a limited time.

Dr. Poston also encourages his patients to pursue intellectual, physical, and social activities, and to have their family members help them achieve this.
“Being engaged in the community can be helpful,” Poston says. “So can anything that works the brain—reading, crossword puzzles, Sudoku, anything cognitive. We encourage regular exercise as well. Patients do better when they continue to be active, both physically and mentally.”

The Alzheimer’s Association lists 10 early warning signs of Alzheimer’s disease. Speak with a physician if you notice:

Inability to do familiar tasks

Confusion about what day or time of year it is

Struggles with verbal or written communication

Poor decision making, such as with finances

Withdrawal from hobbies and social activities