It’s not a wake-up call that anyone is hoping for—a sudden loss of hearing in one ear. But it is often discovered first thing in the morning. Or a person may notice it plummeting rapidly over the course of a few hours. It doesn’t often follow a respiratory infection and there’s no accompanying pain. In most cases, the loss is idiopathic, meaning that the cause is unknown. Sudden sensorineural hearing loss (SSHL), which is estimated to affect 1 in 5,000 people each year, seems to come out of nowhere.

“It just hits,” explains M. Miles Goldsmith, MD, an otolaryngologist and neurotologist with Georgia Ear, Nose, & Throat Specialists. “It usually just hits one ear. I’ve seen it affect two but fortunately that is rare. When a person notices their hearing plummet, the most important thing to do next is get an audiogram and an examination by an ENT physician.” 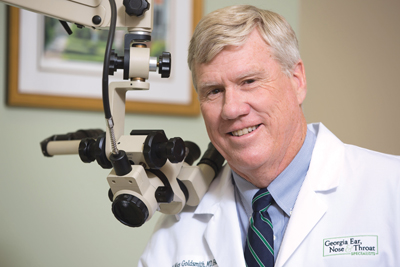 Dr. Goldsmith hopes that people understand the urgency involved in getting tested and starting treatment for SSHL.

“We treat it as an emergency,” Goldsmith says. “This does not mean that a person needs to go to the ER at midnight, however. If there is no pain or trauma within the ear, a patient can come in the next working day for the hearing test and examination. But it should be within a day or two.”

Fred L. Daniel, MD, an otolaryngologist at ENT Associates of Savannah, P.C., also urges people to see a specialist quickly if they experience a sudden, unexplained loss of hearing. 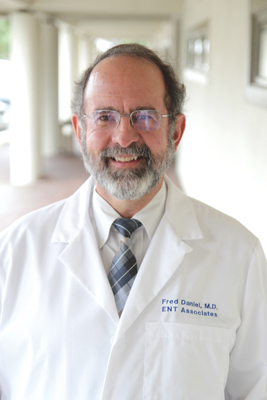 “The sooner the patient is treated, the better the chance that the hearing will return,” Daniel says.  “Assuming you don’t have other symptoms, such as weakness on one side, changes in vision, or a severe profound headache, the best course is to go directly to a specialist. The ER and primary care physicians don’t have the means of testing for sudden hearing loss. We are able to do the testing and begin treatment in the office right away.”

Steroids are the most common treatment for SSHL and have been shown to have a substantial impact on hearing recovery. The steroids can be given either orally or through a direct injection into the middle ear, which both Dr. Goldsmith and Dr. Daniel assure is a simple and relatively painless technique.

“The injection is ideal for anyone who might be affected by oral steroids in their bloodstream, such as a person with insulin-dependent diabetes,” Daniel says.

Patients who only suffer a mild to moderate loss may be able to fully recover their hearing. Some may only recover a percentage of their previous hearing level.

“The more severe the drop, the worse the prognosis for getting a good recovery,” Daniel says.

“Sometimes the patient’s hearing does come back all the way to normal, but not always,” says Goldsmith. “For some patients, the loss can go below the level of where even a hearing aid would help them. Steroid treatment can at least bring them up to a range in which a hearing aid can help.”

Both doctors agree that the more time passes from the initial drop in hearing to the first day of treatment, the less likely it will be for patients to see improvement.

“Sometimes I will hear a similar story from different patients,” Goldsmith says. “They had acute hearing loss and went to their primary care physician. The physician thought they saw fluid in the ear, which is typically a sign of an ear infection, so they prescribed an antibiotic and an antihistamine for the patient. When it didn’t work, they came into our office three to four weeks later. But unfortunately it’s pretty much too late at that point.”

Hearing loss with other symptoms, such as vertigo, pressure in the ear, or fever, can be indicative of other conditions that are also treated differently. Seeing a specialist and providing them with your medical history can help rule out other causes while simultaneously allowing for steroid treatment in a timely manner.

For some patients, even hearing loss due to plugged ears from wax or a head cold can seem dramatic.

“Sometimes it’s hard for them to know what the problem is, and they will need to be seen to be sure,” Dr. Daniel says.

“If it’s not absolutely certain that there’s an infection, sometimes it’s tough to tell if there’s fluid behind the ear or not,” he says. “Come in and let’s take a look, get your hearing tested, and if needed, start treatment immediately.”