While the old warnings about your permanent record may be a myth, what happens in grade school can affect your entire life. Just ask James Dean, the illustrator whose bestselling Pete the Cat books now entertain early readers across the country. 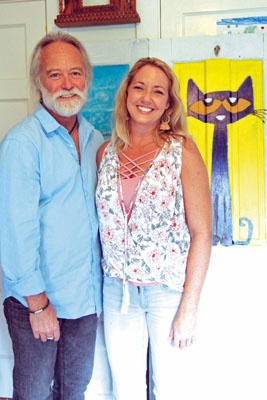 “The reason I got into art was because my father decided that he was going to start drawing and painting,” Dean recalls. “He was my big influence. He was always trying to learn something.”

Now James and his wife Kimberly, who is also an artist and writer, are helping children to learn to read with Pete the Cat. Originally, James had created drawings and paintings for adults while living in Athens, GA, including some based on a scrawny black kitten that he had rescued from a shelter and named Pete. The little black cat became blue in Dean’s drawings, and Pete had an immediate impact on Dean’s growing audience.

Many of Dean’s fans felt that Pete should be a children’s book character. James and Kimberly attempted to create such a book, but weren’t happy with the process. Then James had a chance meeting with a singer-songwriter who was a Pete the Cat fan, and who had written a song about the character that he had recorded for Dean that very day. The songwriter was Eric Litwin, and his lyrics, illustrated by Dean, eventually became the first book, Pete the Cat: I Love My White Shoes, published by Harper Collins in 2010. That book and three more by Litwin and Dean all became best-sellers.

“I still wanted to do one with Kimberly,” Dean says. “So we learned how to work together. We bounce ideas off of each other and go further with the ones we like, rather than telling each other what we don’t like. It’s still not an easy process, but when things start falling into place, it’s really fun. And the first book we did together, Pete the Cat and His Magic Sunglasses, turned out real well.”

The Deans moved to Savannah about four years ago, lured as many are by its beauty and history. They are as busy as ever and feel overwhelmingly humbled by the response to the Pete the Cat books. They hope to honor what the character has meant to children with more stories to come.

“What I see in Pete is what I saw in James when I met him,” Kimberly says. “He was this very laid-back guy who took hardships in stride. He stays calm and looks for something good in everything. And that’s want we want the message to be with Pete.”

Parents and teachers have expressed immense gratitude for what Pete the Cat has done for their kids.

“Many parents of children with autism say that Pete’s book was the first that they read out loud,” Kimberly says.  “And a lot of teachers will use Pete in teachable moments, asking  ‘What would Pete do?’ The kids are amazing. They use Pete in a beautiful way.”

James and Kimberly Dean love to hear that children who were not interested in reading will gladly read all of the Pete the Cat books.  That’s something John Rowlett, MD, is encouraged by as well. Dr. Rowlett has been interested in the effect of reading on child development for more than 20 years.

“Studies have shown that the earlier your start reading to a child, the more comfortable that child gets with reading and language,” Rowlett says. “And clearly, children still have to learn how to read. We may have all of these new media sources, but you still have to sit down, look at the written word and translate it into something useful in your world.”

Dr. Rowlett notes that for years the American Academy of Pediatrics has recommended that pediatricians encourage early literacy, not only to enhance the parent-child relationship but to support early brain development.

“Children that are read to earlier have a bigger vocabulary,” Rowlett says, “and they then read better themselves.” 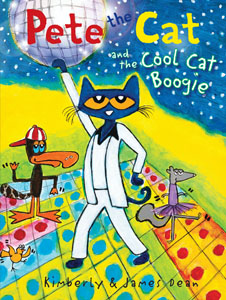 Dr. Rowlett acknowledges that some parents have limits on their time and means when it comes to reading. But he says whatever a parent can do to help is worth it.

“There’s no better investment that you can make in your child’s future than reading to them at an early age,” he says. “You can read the same story 20 times, but also read 20 different books. Those experiences will become part of the language and the fabric of your child’s life.”

Illustrations from Pete the Cat and Cool Cat Boogie (c) 2017 by James Dean. Used with the permission of HarperCollins Children's Books.

Learn more about the Deans and Blue Heaven, their gallery on Tybee Island, at  petethecat.com.