There are some clubs that people would just as soon not join. One of those is the zipper club.

On the plus side, if you’re in the zipper club, you’re a survivor. But you had to go through open heart bypass surgery to get there. For the past half-century, physicians have used the sternotomy incision to treat coronary heart disease. This means a vertical line down the sternum, or chestbone, which is then divided in half, allowing access to the heart. Treated patients would be left with a zipper-shaped scar up their chest after the procedure was done. 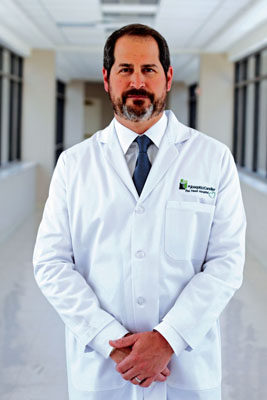 While traditional bypass surgery is appropriate for certain patients, there has been a significant shift in cardiovascular surgery in the last ten years that has opened new paths to treatment.

“While many of our operations haven’t changed, we are now able to complete them through much smaller incisions,” says Jeremy E. London, MD, of St. Joseph's/Candler Physician Network - Cardiothoracic Surgery. “This means less pain and a faster recovery time for the patient. We are avoiding the zipper club.”

Dr. London is board certified in thoracic, vascular and general surgery. He notes that for about 50 years after the advancement of the bypass procedure, heart surgery remained mostly the same. However, in the last ten years, the ability to complete minimally invasive, small incision heart valve surgery has had a tremendous impact on patients and their recovery. Part of this shift has included the advancement of endovascular therapy.

“There has been an explosion of new therapies that are catheter and wire-based,” London says. This includes cutting-edge procedures such as Transcatheter Aortic Valve Replacement, or TAVR. With TAVR, Dr. London works in a team of specialists including an interventional cardiologist, surgical nurses, and a cardiac imaging technician. The team uses a catheter through the femoral artery in a patient’s leg, which is guided to the defective valve.  A new prosthetic valve is implanted while the patient’s heart is still beating, so the bypass heart-lung machine, commonly known as the pump, is not needed, nor is a large incision in the chest.

“Previously such a complex procedure would have required a large chest incision on the side and meant a long hospital stay for the patient,” London says. “Now, many of these patients go home in 48 hours.”

The second shift Dr. London has seen has been in anesthesia.

“There have been significant advances in the pharmacology that anesthesiologists have at their fingertips,” London says. “The faster-acting agents allow patients not only to fall asleep quickly, but when it is time for them to wake up, that also happens more quickly as well. The anesthetics are also much gentler than they were ten or fifteen years ago.”

The third shift has been in the general advancement of the Intensive Care Unit itself.  An effective ICU is crucial for heart patients to have successful outcomes.

“As surgeons, we can perform great operations, but if the ICU and the anesthetists aren’t up to par, then significant problems can occur,” Dr. London says. “Fortunately, the advancements in these areas have directly benefitted the patients in our community. I think we are well ahead of the curve in all three of these areas at St. Joseph’s/Candler.”

The advent of bypass surgery more than fifty years ago was revolutionary in the field of cardiovascular medicine. Dr. London believes the advances of the last ten years have reached the same level of significance, and could continue to reach new heights in the near future.

“The changes have been exponential, not only on the surgical and interventional side, but also from a preventative standpoint,” London says. “We’re gaining a much better understanding of aspects such as genetic therapy and how to identify at-risk patients earlier. With that kind of change, and with the synergy between computer science and medicine in the development of new technology, I don’t think we’ve reached a plateau in the cardiovascular realm.”