In theory, it sounds very simple: get the bad thing out and hook the good things back together. In practice, however, surgeries such as colon resections after a removal of cancer are highly complex procedures requiring advanced training and skills. 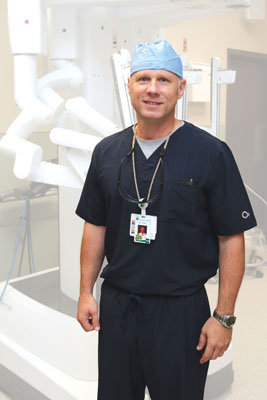 Robotic surgical systems such as the da Vinci Xi are designed to allow surgeons to use those exceptional skills in the most effective way possible. It’s a partnership that benefits both the physician and the patient.

“Because of the Xi’s advantages to us, it creates advantages for the patient,” says general surgeon Anthony M. Foley, MD.  Dr. Foley is Board Certified in General Surgery and is the former Chief of Surgery Chief of Surgery at Winn Army Community Hospital at Fort Stewart. He is da Vinci Xi and Si trained and also currently works to help train new da Vinci surgeons.

“The nature of what you can do internally with the Xi—meticulous dissection and suturing together delicate structures in a very ergonomic way—that’s a big advantage,” Foley says.

The da Vinci Xi Surgical System is the fourth generation in da Vinci technology. St. Joseph’s/Candler acquired the new system this year, joining it with the three da Vinci Si Surgical Systems already being used by surgeons at SJ/C to perform certain complex yet minimally-invasive procedures. All of the systems have immersive 3D-HD visualization, and the robotic instruments precisely replicate the surgeon’s movements.

“The instruments are articulated, meaning they move at the wrist and fingers the way my own wrists and fingers move,” Dr. Foley says. “They basically mimic the motions of my hands.”

With the small incisions allowed by the da Vinci, and the surgeon’s ability to perform such precise operations within the abdomen or chest while controlling the robot from the console, patients can go home sooner after their surgery.

“The technology translates to less tissue damage and less pain for the patient, and a shorter recovery,” Dr. Foley says.

“The Xi allows us to do something that the previous version doesn’t, which is to go into multiple quadrants,” Foley says. “The new arms are designed so that I can work in basically 360 degrees.”

This is highly advantageous for procedures in Dr. Foley’s specialty, such as a colon resection.

“For example, if a patient has a rectal cancer, I’m working toward the pelvis to dissect that out,” Foley explains. “Then I need to work along the left side of the colon and mobilize it so that I can divide above the cancer, and I need to keep working up toward the spleen and the stomach, which means now I’m angled towards the head. I have to make sure I have enough length to bring the colon all the way down into the pelvis and hook it together again.”

In the past, Dr. Foley would either need to dock the robot in place for one part of the surgery and then re-dock it in another, or to do half of the operation with the da Vinci and the other half laparoscopically, without the robot.

“With the Xi, I don’t have to worry about that,” he says. “I can make that transition almost unimpeded.”

The new system is also designed to coordinate with the patient’s bed, which helps Dr. Foley place a patient in the optimal position for different parts of the procedure.

“That is quite helpful with regards to dissection and just being able to see things,” Foley says. “That coordination is part of the next generation technology of the da Vinci Xi. In fact I’d say it’s probably two generations ahead of everything else on the market or currently in development.”