Numbers In The Teens

Teenagers can often get obsessive about the thing that’s most often on their minds—themselves.

This self-focus, while exasperating to parents, is fairly natural and usually part of finding your identity as you grow into adulthood. It can become a concern, however, when it leads to an unhealthy perspective or harmful behaviors.  One example sometimes seen in young athletes is a misperception about body fat. 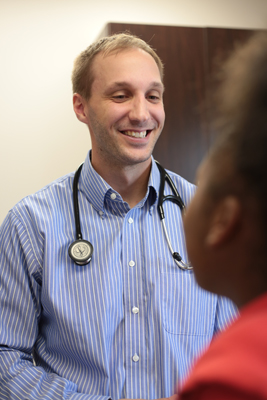 Body fat is essential to the health of vital organs and body regulation, and having too little could actually be fatal. It makes up the body’s composition along with lean body mass—which is the combined weight of water, tissues, organs, bones, and muscle. A common problem that physicians see is people who have more body fat than they should.

“Too much body fat can be a significant risk factor for a multitude of pathologies, including heart disease, type 2 diabetes, and cholesterol issues,” says Fred Harold, DO, of St. Joseph’s/Candler’s Primary Care located in Richmond Hill.

One quick way that physicians estimate a patient’s body composition is the Body Mass Index, or BMI. This is basically a calculation of a person’s weight to height ratio.

“A higher body mass index frequently indicates a patient’s weight is disproportionate with their height, which suggests a higher percentage of body fat than is recommended,” Dr. Harold says. “It may indicate a risk of becoming obese, which is a problem for many teenagers in this country.”

Dr. Harold notes that while BMI serves an excellent role for general assessment, it does not always provide the full picture of certain individuals, including athletes who do a significant amount of weight training for their sport.

“BMI and other body fat measurements serve as barometers for level of fitness, however they often don’t tell the whole story,” Dr. Harold says. “Also, some aspects of BMI, such as our sex and family genetics, are beyond our control.”

For this reason, Dr. Harold advises teen athletes—and really anyone who is concerned about their BMI—not to worry too much about one number.

“Instead, target the constituents that, if done correctly, almost always lead to a healthy BMI or body fat percentage,” Dr. Harold says. “Healthy food choices, physical activity, and adequate sleep—collectively, these offer a much better reflection of one’s health.”

For athletes, a drive for better performance coupled with pressure from peers, parents, and coaches could lead to an unhealthy obsession.

“Excessive worry about body fat is a particular concern in female teenage athletes,” Dr. Harold says. “When an athlete’s workload exceeds their nutritional intake required for recovery, it predisposes them to disruption of the body’s hormonal signaling. This leads to what is known as the female athlete triad, commonly defined as disordered eating, menstrual irregularity and alterations in bone density.”

Further problems that arise from female athlete triad include depression, poorer performance and healing time, and even stress fractures. Besides being unhealthy, this can also hinder the athlete from playing the sport they were hoping to excel in. Dr. Harold reminds patients that discussions about their body fat are designed to help them make healthy choices, whether the issue is too much or too little.

“The BMI/body fat discussion is not meant to be discouraging to teenagers,” Dr. Harold says, “but rather a lesson in self-awareness. We want to intervene and help before the consequences of an unhealthy lifestyle occur. By recognizing at-risk teenagers and promoting smarter choices, we can hopefully create a brighter future for all kids.”