Clearing The Air On COPD

A common lung disease encompasses both emphysema and chronic bronchitis

Despite the growing unpopularity of smoking, the effects of this very bad habit are still threatening the health of millions of Americans. Smoking is the primary risk factor for Chronic Obstructive Pulmonary Disease, or COPD, which is the third leading cause of death in this country. But what is COPD? 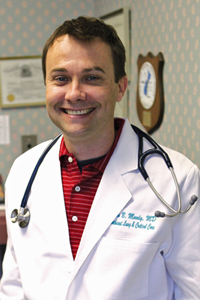 Depending on which end of the spectrum a patient falls, the symptoms of COPD can vary.

Though smokers are most at risk, Dr. Moody also notes that occupational dust and chemical exposures as well as indoor and outdoor air pollution exposure can contribute to the development of COPD in non-smokers. Genetically, individuals who lack the ability to produce a lung protective protein called alpha-1 antitrypsin are also at greater risk for the disease.

“GOLD utilizes a staging system to categorize COPD and subsequent treatment suggestions,” Moody says. “Each patient’s treatment plan may include daily use of inhalers, use of rescue inhalers, or the use of a nebulizer machine, which administers medication in the form of a spray.”

“This testing quantifies lung function and lung capacity,” Moody says. “This is what helps to drive treatment strategies.”

Learn more about COPD by taking our quiz.