In 2014, the American Cancer Society estimates that about 96,000 people in the United States will be diagnosed with colon cancer. About 40,000 new cases of rectal cancer are predicted. The lifetime risk of developing colorectal cancer is about 1 in 20.

Physicians and nurses at St. Joseph’s/Candler’s Nancy N. and J.C. Lewis Cancer & Research (LCRP) Pavilion know these numbers are too high, but they also know one encouraging fact: the death rate from colorectal cancer has been going down for decades. This good news can be partially attributed to colorectal screenings. Early detection often leads to better treatment outcomes.

Here are some of the basic facts you need to know about colorectal cancer:

With colorectal cancer, there are some risk factors you can change, and some you can’t. 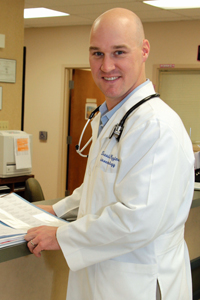 “Age is a major risk factor for colon cancer,” says Travis F. Wiggins, MD, a gastroenterologist who is also the Co-Chair of the Gastro-Intestinal Multi-Disciplinary Team at the LCRP.  “For individuals with an average risk for colon cancer, the lifetime incidence in the United States is 5 percent to 6 percent. However, 90 percent of these cases are diagnosed after the age of 50.  Colon cancer is rare before age 40 but the incidence begins to increase between 40 and 50 years of age.”

“Personal history of inflammatory bowel disease such as Crohn's disease or ulcerative colitis increases the risk of colon cancer,” Wiggins says. “Also, if your physician found colorectal polyps during a prior colonoscopy, you are at an increased risk.”

Not surprisingly, having had colorectal cancer in the past increases the risk of developing new cancers in other parts of the colon. The risk is even greater if you developed the disease when you were younger.

Inherited gene defects are the cause of colorectal cancer in about 5 percent to 10 percent of patients. People with Type 2 diabetes are also at an increased risk. In fact, both diseases share the first risk factor that people can change: excess weight.

“Obesity is associated an increased risk of colon cancer compared to the general population, as well as increased risk of death from colon cancer,” Wiggins says. Likewise, physical inactivity can be a factor. Along with exercise, Dr. Wiggins recommends a diet that is high in natural fiber—vegetables, fruits, and whole grain foods—to help reduce the risk. In general, Dr. Wiggins says, red and processed meats should be minimized.

Finally, smoking is linked not only to colorectal cancer but also lung and other cancers.

“Smoking is the number one preventable risk factor that imparts the greatest deleterious effect on one’s overall health,” Wiggins says. “It should be completely avoided.”

“Men and women who have an average risk for colon cancer should begin colon cancer screening at age 50,” says Dana Coleman, Patient Navigator at the LCRP. “However, a new report shows that one third of the people who should be getting screened have not done so.” 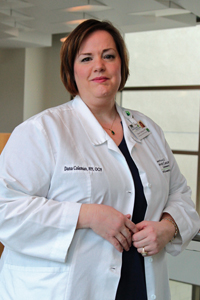 The reluctance to be screened is something that both Dr. Wiggins and Coleman want to see changed because colorectal cancer that is found early is more likely to be curable. The most recommended screening for making that early detection is the colonoscopy.

“Colonoscopy is the number one recommended modality for colon cancer screening because it allows both detection as well as removal of any polyps encountered,” Wiggins says.

Dr. Wiggins suggests that African-American patients consider getting screened at age 45. Patients with a family history of colon cancer, as detailed above, should plan on getting screened even earlier.

“People with family history of colon cancer should start having a colonoscopy at 40 years of age, or 10 years younger than the earliest diagnosis in their family, whichever comes first,” Wiggins says. “The colonoscopy should be repeated every five years.”

Another screening option is the virtual colonoscopy, also known as a CT colonography. The preparation for this screening is similar to that of a traditional colonoscopy, usually involving laxatives to empty the colon. The patient is then scanned while lying down. The CT scanner produces detailed images of the body which can be examined by the physician.

“One possibly advantage of this screening technique over colonoscopy is the lack of need for sedation,” Wiggins says.  “Any polyps encountered, however, would require a subsequent colonoscopy and the preparation required for it.”

Another test that is used to detect signs of colon cancer is the fecal occult blood test. Blood vessels near the surface of large polyps or cancers often release a small amount of blood into feces as it passes, but not enough to be seen by the naked eye. This test uses a chemical reaction to determine if there is blood in the stool. An advantage of this test is that it can be done in your own home. But unlike a colonoscopy, it must be done once a year, and if a test is positive, the patient will need to have a colonoscopy to determine the cause of the bleeding.

“Colorectal cancer causes more than 50,000 deaths per year,” Coleman says. “Both prevention and early detection are possible through screenings, so if they are available to you, then you owe to yourself and your loved ones to have them done.”