About 2.2 million Americans are diagnosed each year with basal and squamous cell skin cancers, according to the American Cancer Society. These cancers often appear on sun-exposed areas such as the face and head, especially in fair-skinned people.  Not surprisingly, people who live in areas with more days of bright sunlight are at a higher risk of developing skin cancer.

“Most basal and squamous cell skin cancers occur on the face and are the result of sun exposure,” says Timothy J. Minton, MD, of Savannah Facial Plastic Surgery, a division of Georgia Ear, Nose & Throat Specialists. 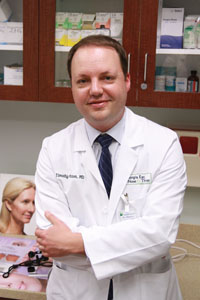 Unfortunately, the small area of cancer that can be seen on the surface of the skin often hides a deeper problem.

“Skin cancer can be really elusive,” Minton says. “I recently saw a patient who had two non-healing spots under her right eye and on the side of her nose, and they were tiny. When her biopsy came back as an aggressive subtype of basal cell cancer, I recommended her for Mohs surgery. This type of surgery is done by a dermatologist that also specializes in pathology. Essentially, they remove a skin cancer layer by layer until it’s cleared.”

While the Mohs surgery was successful for the patient, the surgeon needed to remove a large amount of skin, and the two red dots on the patient’s face became large and unsightly holes.  It is these kinds of cases in which the expertise of Dr. Minton, the region’s only fellowship-trained, Double-Board Certified facial plastic and reconstructive surgeon, is most beneficial.

“For this patient, I elected to use both a local flap and a skin graft,” Minton says.

With a local flap, adjacent skin is rotated or moved to cover the area where the cancer was removed.  With skin grafting, a layer of skin is taken from another part of the body such as the neck or behind the ear and used to cover the defect.

“In this case, as with many others, I was able to hide the surgical scars in the natural wrinkle lines of the face,” Minton says.  “After several weeks, any indicators of the surgery and reconstruction were barely visible.”

Minton’s ultimate goal is a natural look, not a perfect one.

“I feel it’s part of my job to let patients know that I can’t make them perfect, but I will do my best to make you look normal and natural with as minimal scarring as possible,” he says.

Dr. Minton recalls a patient who had skin cancer on her nose. The cancer’s removal created a large hole in the lower part of the nostril.

“A skin graft would have created a dimple there,” Minton says.  “Instead I rotated skin from the patient’s cheek that is still attached to the blood vessels, which keeps the skin healthy.  Over the course of a few weeks, new blood vessels grow in through a process called neovascularization. The excess of the flap is then removed and the new skin has the same thickness as the original skin.”

“The result is a normal-looking nose,” Minton says. “It is very hard to tell that it is not the same skin and very hard to find the scar.”

The aesthetic results of surgery are not Dr. Minton’s only concern, however. He also works to ensure that the parts of the face he reconstructs continue to function as they once did.

“That’s where my extra ENT training comes in handy,” Minton says. “I deal with airway problems in the nose, making sure that patients retain nasal function. I focus on keeping the ear defects to a minimum so that the patient can wear glasses and things like that. I’ve had to reconstruct the tear duct apparatus for patients who had cancer in their eyelid, without which the patient could suffer from chronic tearing, dry eyes, and possibly more serious visual problems.”

“When reconstructing a patient’s lip, I want the result to look natural but I also want to make sure there is still good muscle function,” Minton adds. “The patient should be able to speak, articulate, eat and swallow as they did before. It’s as important to me as the aesthetics of reconstruction.”

Learn more about Dr. Minton and his practice at savannahfacialplasticsurgery.com.