Imagine being hungry but never looking forward to a meal. That’s what Haley Rogers faced as her gallbladder failed to function properly.

“I was having pain every single time I ate,” Rogers says. For patients who persistently suffer from either an improperly functioning gallbladder or one that is plagued by gallstones, a cholecystectomy is often recommended.  This is a surgical removal of the gallbladder that Rogers’ physician recommended for her.

“There was no point in saving it,” Rogers recalls. She was, however, understandably concerned about her recovery from surgery and the scars that would remain on her abdomen. That’s when general surgeon E. Stephen Yeager, MD, told her about robotic surgery.

“With the da Vinci Single-Site Surgery system, I am able to remove the gallbladder with only one small incision in the belly button,” Dr. Yeager says. 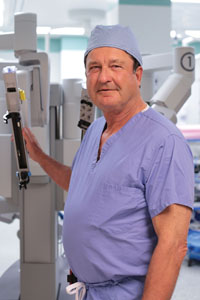 Robotic surgery is the latest advance Dr. Yeager has seen throughout his career, in which he has performed thousands of cholecystectomies.

“The evolution of the technology from open surgery, which involved a large incision, to laparoscopic surgery, which required four small incisions, was a major advancement,” Dr. Yeager says.  “Patients benefitted greatly with less blood loss, less pain, and a much quicker recovery after surgery.”

Now, with the robotic surgery of the da Vinci system, patients enjoy the same benefits as with laparoscopic surgery but with the added benefit of the surgical scar being hidden within the belly button area.

“For people who may be more concerned about body image, which I see often in my younger patients, this is a much better procedure cosmetically,” Dr. Yeager says.  “If you want to go to the beach with a bathing suit after your surgery, you can do so without having to worry about visible scars.”

Rogers went home the day of her surgery and, along with not having to worry about a group of scars on her abdomen, she doesn’t have deal with pain in her abdomen when she eats.

Dr. Yeager enjoys benefits from the da Vinci surgery system as well. The robot’s sophisticated computer-aided equipment allows him to work with the magnified views of regular laparoscopic surgery while retaining the three-dimensional view of traditional open surgery, all in high definition.

“I like the improved visualization of the da Vinci,” Dr. Yeager says.

Not all of Dr. Yeager’s gallbladder patients are candidates for da Vinci Single-Site surgery.  Obese patients or those with a severely inflamed gallbladder may still be better suited to laparoscopic or even open surgery. But Dr. Yeager hopes more of his patients will be able to benefit from the nearly scarless results afforded by the da Vinci robot.

“Robotic surgery is a new technology that I’m enjoying,” Dr. Yeager says. “In fact I enjoy it more and more each day. It’s now my preferred method.”


To read more about all the different da Vinci procedures at St. Joseph’s/Candler or to find a da Vinci surgeon, visit  www.sjchs.org/davinci.