When people think of reflux disease, they most likely imagine the heartburn caused by acid reflux, in which stomach acid flows backward into the esophagus. But another kind of reflux happens in the veins, causing uncomfortable and sometimes unsightly symptoms.

“Venous reflux is a condition where blood, instead of returning in its normal direction to the heart, abnormally returns down the leg,” says vascular surgeon Christopher Busken, MD. “This occurs when a series of one-way valves within the leg veins fail.”

Venous reflux, also known as venous insufficiency, can lead to: 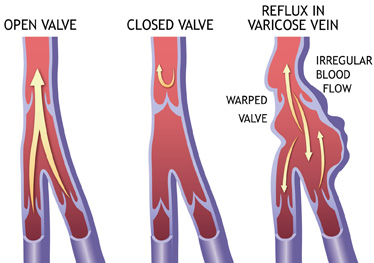 The mainstays of treatment for venous reflux include prescription compression hose (to assist the leg muscles to return blood to the heart) and elevation. But depending on the severity of reflux, as determined by a non-invasive ultrasound, Dr. Busken can further direct treatment for:

Venous reflux is a fairly common condition, and people can experience symptoms without seeing visible varicose veins. Talk with your doctor if you are experiencing any of the symptoms above and to learn what minimally-invasive treatments might work for you.