The End Of Tunnel Pain

If every part of the body could be tested for intelligence, muscles would score low. 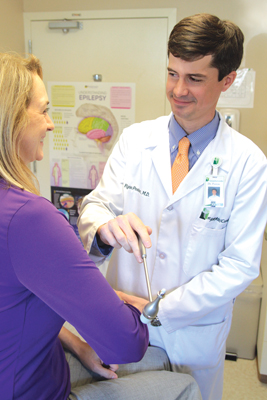 “Muscles are not very smart,” says Ryon Poston, MD, a Board-certified neurologist at St. Joseph’s/Candler Physician Network – Neurology. “They have to have a nerve to tell them what to do.”

If the nerve cannot innervate the muscle—stimulate it to action—it will grow weaker over time. One area of the body that is commonly affected by a nerve that can’t get its signal through is the carpal tunnel. This is the narrow space in the wrist where a nerve called the median nerve enters the hand.

“The tunnel is tight anatomically,” Poston explains. “It has bone on the bottom, bone on each side, and a thick ligament on top. The median nerve shares this tunnel with nine tendons.”

If the median nerve gets irritated or swollen, it can lead to entrapment neuropathy, more infamously known as carpal tunnel syndrome. If you have not suffered from it yourself, chances are you know a co-worker who has.

Repetitive motion in certain kinds of physical work such as painting and carpentry, but also in administrative positions with continuous data entry or keyboarding, can lead to median nerve injury. Others with this condition may simply have more narrow carpal tunnels than others.  The syndrome could be the result of trauma to the area, such as a broken bone, or a complication of another medical problem such as diabetes or hypothyroidism.

Whatever the cause, the symptoms are similar for most patients—numbness, tingling, or even pain in the hand. For more severe cases, there is muscle weakness, causing patients to drop things in their grip. 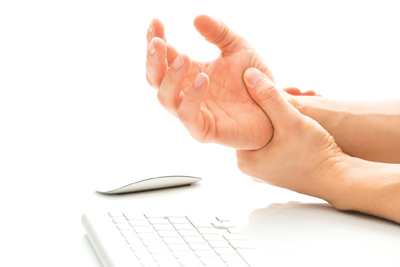 Though less common than carpal tunnel syndrome, a condition called cubital tunnel syndrome also brings many patients into Dr. Poston’s care. This condition arises from pressure or stretching of the ulnar nerve, which runs through a groove in the elbow.

Cubital tunnel syndrome also causes numbness, tingling, pain, and possibly weakness in the hand. The pinky and ring finger may have the ‘pins and needles’ feeling, whereas the thumb, index, and middle fingers are most often affected by carpal tunnel syndrome.

Compression and stretching of the ulnar nerve can lead to cubital tunnel syndrome over time. Sometimes it is linked to an occupation—the truck driver who rests his elbows on the window or center console for hours, or the salesperson holding the phone to their ear most of the day.

“Bending your elbow to a certain degree puts intraneural pressure on the nerve,” Poston says. He notes that many people bend their arms under their pillow to support their head while they sleep. This can leave the ulnar nerve stretched for long periods night after night.

As with carpal tunnel syndrome, the anatomy of a person’s arm may also make them more susceptible to this condition.

Both conditions can be diagnosed with the help of nerve conduction studies and an electromyography, or EMG, though Dr. Poston may tailor the tests slightly to confirm a diagnosis and to rule out other possible nerve issues.

For the nerve conduction study, electrodes are placed over the muscle supplied by the nerve. Then, through electrical stimulation, the strength and speed—or lack of it—in the nerve’s response is recorded. In an EMG, a tiny needle is inserted into the muscle to evaluate its electrical activity.

In most cases, if something we do causes pain, we just stop doing it. For people whose source of income is also the source of their syndrome, simply stopping the motions needed for work isn’t feasible. However, employing other conservative treatments often works well.

“For carpal tunnel, patients can wear splints that help keep their wrist straight,” Poston says. “This can be very effective at night, when people would normally flex their wrists as they move into different sleeping positions, pinching on the nerve without knowing it. In milder cases, just this change alone can really go a long way to helping people.”

Similarly, an elbow brace can help prevent the stretching during sleep that contributes to cubital tunnel syndrome. Dr. Poston says that even just using a household item, such as a rolled-up towel, to keep your arm from bending to a far degree at night can help.

“It sounds simple, and it is simple,” Poston says. “But even those small changes can make the difference between getting better or not.”

Other treatments, such a physical therapy or corticosteroid injections into the wrist to reduce swelling and inflammation, can also relieve symptoms.

For severe cases of both conditions, surgery is an option. In the carpal tunnel, the thick ligament is cut in such a way to give the median nerve more room to operate correctly.  For the cubital tunnel, the ulnar nerve may need to be moved by the surgeon to relieve the pressure on it. Part of the bone may be taken out as well.

“I always remind my patients that, even with the best treatments, it can weeks to months for the nerves to get better,” Poston says. “But they do get better, and can start telling those muscles what to do again.”