The condition known as shingles, and its infamous painful rash, is caused by a virus you’ve carried for years

Do you remember having chickenpox? Even being able to stay home from school was little consolation for those intensely itchy blisters. But once you got through it, you could at least take comfort in knowing you were immune for life, right? 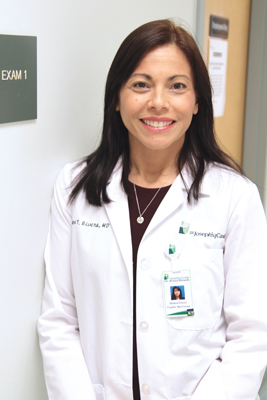 “After you have chickenpox, the virus that causes it stays in your body, in certain nerve cells,” explains Milagros T. Rivera, MD.  “Most of the time your immune system keeps the virus in these cells. As you get older, or if your immune system gets weak, the virus may reactivate, escape from the nerve cells, and cause a condition called herpes zoster, which is more commonly known as shingles.”

Shingles causes a painful, blistering rash. It begins with raised reddish bumps that turn into blisters after a few days. The rash may wrap around your back and chest, or it may be on one side of your face. The blisters crust over and fall off after 7 to 10 days. Unfortunately, the pain may last longer.

“The good news is that most of the time shingles can be successfully treated with antivirals,” Rivera says. “These medicines reduce the severity and the length of shingles. They work better if you start taking them in the first three days after you get the rash. For this reason it is advisable to see your primary care physician at the first signs or symptoms of the virus.”

Dr. Rivera also suggests that patients use over-the-counter medicine like acetaminophen or ibuprofen to help with the pain from the rash. (Aspirin is not recommended because it might cause a complication called Reye's syndrome, a liver problem.) Medicated lotions or cool compresses might also relieve the discomfort of the itching.

The Centers for Disease Control and Prevention (CDC) reports that almost 1 out of every 3 people in the United States will develop shingles, but a vaccine is available to reduce the risk. The CDC recommends the vaccine for people aged 60 years and older, as does Dr. Rivera.

“An ounce of prevention is worth a pound of remedy,” she says. “So my recommendation is to get the vaccine!”

The pattern of the shingles rash is often a stripe or is similar to a belt shape along the torso. This trait is the source of both names for the condition. The ‘zoster’ in herpes zoster comes from a Greek word meaning ‘belt or ‘girdle.’ Likewise, the word shingles derives from a Latin word cingulus, which is a variant of the Latin cingulum, which also means ‘girdle.’ But be aware that shingles can present itself anywhere on the body, including the face, where it can affect the eye.