The first time a pregnant woman gets a glimpse of her child is during the first ultrasound, during which the sound waves from a handheld probe are transmitted and then interpreted by a computer to create an image on a monitor. Such a powerful experience naturally has made ultrasound technology seem synonymous with pregnancy. But ultrasound can be used to observe a variety of internal structures, making it a quick and painless way to help physicians make a diagnosis in many different fields including cardiology, urology, and ophthalmology.

One area of medicine where patients may be surprised to find ultrasound is neurology. However, in the last several years, neurologists like Jonas Vanags, MD, at St. Joseph's/Candler Physician Network – Neurology, have been using ultrasound to see what other tests can’t show them.

“With our electromyography, or EMG, and nerve conduction studies, we can get physiologic information, such as how strong or fast the response of a nerve is,” Vanags says. “But that alone may not tell us an underlying cause. An ultrasound can give us anatomic information.” 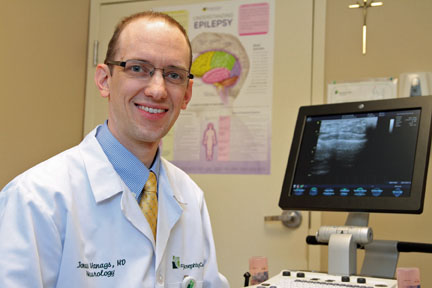 Sometimes it is a simple matter of actually seeing how big a nerve is.

“If the problem is entrapment neuropathy, the most common of which is carpal tunnel syndrome, a nerve can swell from two to three times its regular size,” Vanags explains. “You can actually see the swollen nerve with ultrasound.”

Other anatomic information, such as a tumor or a cyst on a nerve, would not be detected without imaging. Ultrasound can also reveal anatomical variants in a nerve. For example, patients with carpal tunnel syndrome may have a bifid median nerve, meaning that the nerve is divided into two nerve bundles. These two bundles could have an artery running between them, which would be an essential piece of information if surgery for carpal tunnel syndrome was being planned.

“Ultrasound is a safe, quick, and inexpensive tool that improves the diagnostic yield,” Vanags says. “The information it provides, in conjunction with our other testing, makes a difference in what we do next.”

What is the ultra in ultrasound?

An ultrasound probe sends sound waves which echo off the body’s internal tissues at varying degrees. This information is recorded and converted into an image. The frequency of the sound is so high that it can’t be heard by the human ear, hence the pairing of the term ultra (meaning beyond) and sound.