Whether it develops in childhood or adulthood, flat feet can affect your quality of life

It’s not a problem you can really see. Sometimes you can’t even feel it. But it’s right there at your feet.

The official term is pes planus, but you know it better as fallen arches or flat feet. This is because the upward curve—the arch that is formed and strengthened by bands of connective tissue called tendons—isn’t there when you stand or walk. A fallen arch can cause fatigue and foot pain, and sometimes even leg and back pain.

The sooner that flat feet can be diagnosed, the easier they can be managed. Foot and ankle physicians can offer several options to manage your fallen arches.

“A flat foot in children is usually a congenital issue,” explains Prianka Sharma, DPM, of St. Joseph’s/Candler Physician Network – Podiatry. “Most children are asymptomatic and it is often their parents who discover it.”

In infants and toddlers, the arches of the feet haven’t yet developed. Most children outgrow pediatric pes planus, but orthotics—a type of artificial support—can help those who don’t.

“If we can get children with flat feet in proper support and shoe gear, they can have a relatively normal life and pretty much do what they want to do,” Dr. Sharma says. “In a way, we can help mold the foot with orthotics because it is still growing and still flexible.”

If left untreated, however, what was once flexible becomes rigid.

“If your child is flat footed, it’s not the end of the world, especially if they are not complaining of symptoms,” Dr. Sharma says. “But at the same time, that doesn’t mean we can ignore it. This is, unfortunately, a progressive issue if you leave it untreated. We can catch it and prevent the progression.”

Surgery is rarely needed but is a long-term option.

“If a child is not reacting well to orthotic inserts, for example, we can consider surgery,” Dr. Sharma says. “That would be done down the road when the patient is skeletally mature.”

Flat feet or fallen arches can also develop in middle-aged and older adults, often due to normal aging. 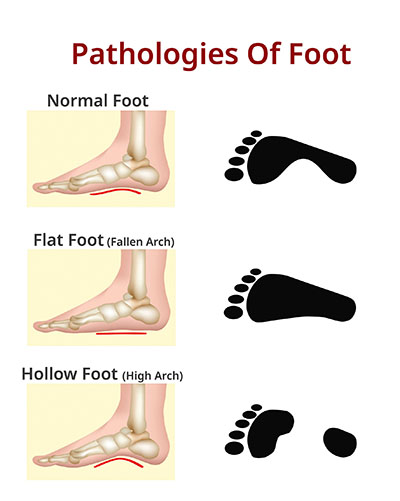 “The specific tendon that is responsible for keeping your arch elevated is the posterior tibial tendon,” Dr. Sharma explains. “Like all tendons in our body, this tendon can become degenerated over time. Obese patients are more at risk, and women experience it more frequently than men, usually due to the fluctuation of weight during pregnancy.”

Having an athletic lifestyle or a job that keeps you on your feet all day are actually not factors in the development of adult acquired flatfoot. The posterior tibial tendon has simply been lengthened and flattened out over time.  As with pediatric flat feet, a person may not notice any pain or problems. But for some, the lack of the shock absorption that a proper arch provides can make your feet—and subsequently you—easily tired.

“Whatever your daily activities have been, with flat feet they can now cause fatigue,” Dr. Sharma says. “Plus, a lot of force goes through the ankle when you are walking. So ankle pain can be an issue as well, then it goes up to knee, and so on.”

Dr. Sharma stages the degree of the flat feet to determine the simplest and most effective treatment. If caught in stage 1—where the tendon is degenerated but not torn—the use of orthotics and proper shoe gear can alleviate pain. In stage 2, the tendon is torn but the foot is still flexible and can be treated with a minimally-invasive procedure to repair the damage. For stages 3 and 4, more complicated surgery is needed, usually requiring the fusions of joints and ankle joint involvement.

While options such as shoe modifications and orthotic devices can be effective early on, you will have to get used to them.

“You will probably have to wear orthotics for the rest of your life,” Dr. Sharma says. Most adult patients are fine with this as a tradeoff for avoiding foot, leg, or back pain, and possibly surgery later on. Pediatric patients, Dr. Sharma admits, may need a little more convincing.

“Kids may not like it if they have to wear an orthotic device and their best friend doesn’t,” Dr. Sharma says. “As physicians and parents, we have to remind them that we are preventing something from being a problem in their future. We are helping your feet as you grow.”