Good For A Laugh

Everyone except Harrison Scott Key.

“Looking back, I was okay at those things but at the time I felt like a complete idiot,” Key says. “I didn’t enjoy it. I would do dumb things on the football field; when I was trying to hunt, I kept missing animals.”

When Key later recounted the stories of his screw-ups, though, he found he could get everyone laughing. 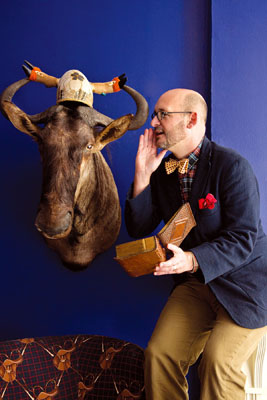 “That felt good,” he says. “I got a lot of attention for being funny, and I think it turned me into a monster. I just kept doing it.”

Key got national attention when his first book, The World’s Largest Man, was released in 2015 and went on to win the Thurber Prize for American Humor in 2016. His next book, Congratulations, Who Are You Again? also drew acclaim for its deft mixture of comedy and poignancy, all through the sometimes unforgiving lens of honesty.

“You can write with love, even when you’re saying hard things,” Key says. “And humor fixes a lot.”

Humor is what connected Key to others in an environment in which he didn’t seem to fit. His struggles to connect with his father over activities like hunting and baseball were not that funny at the time, but would prove to be rich material for Key. As would his growing up in the Mississippi woods, back before the days of the internet.

“With books and music, I felt less alone,” he says.

Key’s writing developed strongly in college. He studied philosophy but also wrote plays, monologues and articles for the school paper. Once again, it felt good to make people laugh. 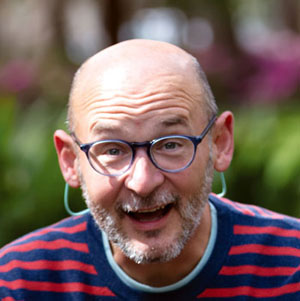 “As long as you’re not doing it at someone else’s expense—and that has always been a struggle of mine, and I think anybody who’s funny has that struggle—that joy needs no justification,” he says.

Key continued to hone his craft while teaching high school English, getting married and starting a family, and finally making the decision to accept a job as a speech writer at the Savannah College of Art and Design. Later he began teaching English and writing at the school, as well as serving as chair of liberal arts and executive dean.

But Key would wake himself up hours before his job, and before sunrise, to write his first book. He’d written “a lot of terrible stories” and some were based on his life. He found that the ones that engaged his friends and colleagues most were the ones about his dad.

After years of 12 to 14-hour days of writing then working, Key got his first memoir, The World’s Largest Man, published.

“There’s an irony in the title, because I’m taller than my dad,” Key says. “But he was built like a brick outhouse with Popeye arms and chopped wood with one hand.” 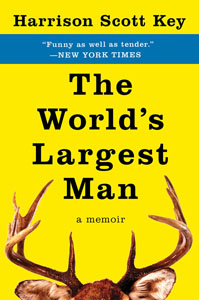 Key was dealing with some grief about his relationship with his father, worried that he’d failed him. But sharing those truths proved powerful—and yet really funny—to readers.

“I realized that funny things are funny because there is a sadness, or anger or pain—some kind of minor key running under everything,” he says.

Beyond creating a book that people would enjoy, the process taught Key a lot about himself and the people he loved.

“The real meaning of the title is that everybody’s father is the world’s largest man,” he says. “This is true of absentee fathers too, because the shadow of that never leaves your life.  Some kid may imagine his dad riding his motorcycle across the prairies, even though he’s a deadbeat who left his family. We’re all 5-years-old, and we’re all looking up at our dads.”

When he became a finalist for the Thurber Prize, Key was thrilled that a “hillbilly” could be among a small group of writers that in the past included humorists such as Dave Barry and David Sedaris. He splurged on bringing his whole family to New York for the ceremony, and it was during a reading—even before he was announced as the winner—that Key remembered why he’d done all of this in the first place.

“It was such a culmination of my desire to bring joy,” he says. “When you’re writing and making yourself laugh or doing a reading and making other people laugh, that’s as good as it gets.

Key’s next book, Congratulations, Who Are You Again?, centers around the writing and reception of the first book, including how Key’s ambition to be a working dad and a published writer was affecting his family life. He is now working on a memoir that will complete his non-fiction trilogy. 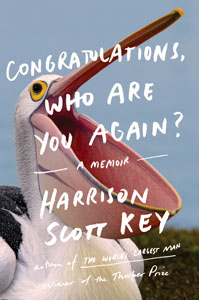 “It will have a lot of the same characters but also some new people we haven’t met yet,” he says.

One thing that won’t be the same is how Key will feel physically while he writes it.

“As a writer, I’m obviously pretty sedentary and I come from large people,” he says. “But when I was around 35, I weighed 250 pounds. Technically I was morbidly obese.  I was unhappy. Nothing fit right. I hated wearing belts.”

Soon Key found himself going to the doctor for constant back problems.

“I felt like an old man,” he recalls. “The doctor said, ‘You don’t have any muscles in your abdomen or your back.’”

With his long work days and a wife and three kids at home, Key didn’t think adding a workout to his schedule was either feasible or desirable.

“Something that I’m passionate about is not running,” he says. “But I had to do something. So I started riding my bike to work. It was awful, hot and sweaty. To do it, you have to be willing to walk into a meeting like you’re walking in from recess in the third grade.”

His back felt better immediately. And eventually he found it fun. He also found himself walking more and getting a stand-up desk at work.

“Those changes were little but they changed everything,” he says. “The healthier you get, the easier it is to be healthy and to make healthy choices. I weigh 185, and I haven’t been that low since before I was married. Now I’m always pulling my pants up, but I still hate belts.” 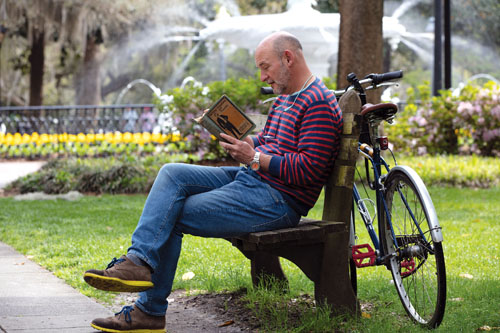