Chemotherapy has been one of the most common treatments for cancer for decades. This is the treatment in which a strong medicine or a combination of medicines is delivered to patients with various types of cancer. It can make tumors smaller before surgery or radiation therapy and destroy any cancer cells remaining after those treatments.

It also wears you out. Side effects such as fatigue are inevitable because chemotherapy kills fast-growing cells, which cancer cells are. But some healthy cells also grow quickly—cells in your hair, mouth and intestine. Hair loss, mouth sores and nausea are all common side effects that usually go away after you’ve finished chemotherapy. 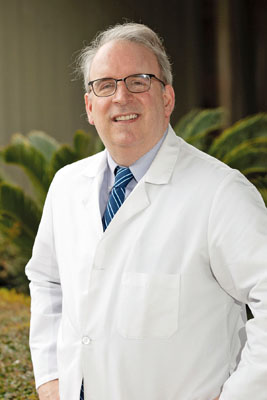 In the past five or so years, however, new developments in medical oncology have changed physicians’ ability to individualize treatment. And it has enhanced the approach of medical oncologists like Stephen “Drew” White, MD, of Summit Cancer Care.

“It is personally very gratifying to participate in the care of patients with tumors amenable to treatment with targeted therapy,” Dr. White says.  “These therapies are often more effective and far less toxic than traditional chemotherapy.”

Avoiding damage to normal tissues and cells while destroying cancer cells sounds like the stuff of science fiction—how can a medicine know which cells to go after?

“There are specific proteins or enzymes that are more critical to the survival and reproduction of cancer cells than normal cells,” Dr. White explains. “A therapy designed to block the function of those proteins is a targeted therapy.  Other targeted therapies utilize toxic agents attached to specialized proteins, called monoclonal antibodies, that can find and precisely deliver the agents to cancer cells.”

Patients undergo a biopsy, where physicians remove a piece of the tumor to be sent for testing. The tests help determine if your type of cancer has a target, and what treatment will be used to aim for it. If a target is found, the patient may not need chemotherapy.

“The unifying goal of targeted therapy is to selectively act on tumor cells and thereby avoid the toxicities to normal cells that often accompany chemotherapy,” Dr. White says.

Just as a masked bandit avoids getting caught by hiding his identity while robbing a bank, some cancer cells have a genetic makeup that hides their identity from the immune system. The introduction of immunotherapy has given the immune system back the advantage in this fight, and it is making a difference even in advanced malignancies.

“Unlike targeted therapies and chemotherapy, cancer immunotherapy does not directly attack cancer cells,” Dr. White explains.  “Instead, these medications ‘unmask’ malignant cells, allowing these cells to be recognized and attacked by the patient’s immune system.”

Dr. White says the use of immunotherapy has significantly increased the fraction, or percentage, of patients who become long-term survivors of advanced malignant diseases previously associated with a dismal prognosis.

“Immunotherapy is now part of treatment for many, if not most, forms of cancer,” he says.

For some patients, conventional chemotherapy is still the most appropriate treatment. But the level of support these patients receive, including advanced drugs that help prevent nausea and attention to details of comfort in the infusion suites, has never been better.  The physicians and staff at Nancy N. and J.C. Lewis Cancer & Research Pavilion (LCRP) treat patients on a continuum of care.

“Patients receive pretreatment education about the route of administration, schedule, and potential and anticipated side effects of treatment. During treatment, they are monitored closely with laboratory testing and other means to adjust doses and treatment schedules,” Dr. White says. “Treatments with chemotherapy can be accompanied by various physical, emotional, social, nutritional and other challenges. All of these needs are addressed collectively at the LCRP by a team variably consisting of medical and radiation oncologists, surgeons, palliative care specialists, social workers, nutritionists and nurse navigators.”

It all comes back to the essential principle of individualized treatment, or what is more broadly known as precision medicine. For oncology, that means more investment in targeted therapy and a possible decline in the role of traditional chemotherapy moving forward.

“I think that the next five years in oncology will be dominated by an increasing arsenal of drugs that specifically target abnormal cancer gene expression,” Dr. White says. “It is also encouraging to see a subset of patients who respond well to immunotherapy and can maintain a response to this form of treatment for years, or possibly indefinitely.”

To see how these advances have affected the Nancy N. and J.C. Lewis Cancer & Research Pavilion in Bluffton and Hilton Head, go here.